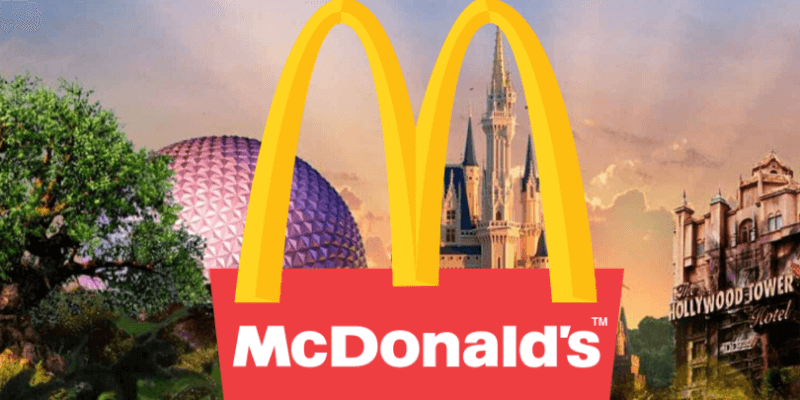 If going to McDonald’s is one of your must-dos whenever you visit Walt Disney World, listen up. The McDonalds on Walt Disney World property is closing soon for refurbishment, and it won’t reopen until next year.

According to recent permits, the McDonald’s located near Disney’s All-Star Resorts at 1596 W. Buena Vista Drive — the last remaining McDonald’s location on Walt Disney World Resort property — will be closing on October 30.

The fast-food restaurant will be undergoing a pretty extensive refurbishment to completely reimagine the restaurant’s looks. New roofing, architectural improvements, and overall improvements to the building itself are all stated in the permit filed with Orange County.

Since the reimagining of McDonald’s on Disney property is likely to take several months to complete, the restaurant isn’t set to open back up again until sometime in 2020. We’ll update you when we know more information, but as of now an exact date next year hasn’t yet been announced.

There used to be more McDonald’s locations on Walt Disney World property, namely a restaurant at Downtown Disney (before it became Disney Springs as we know it today) and fry stands in the theme parks. But McDonald’s and Disney’s nutrition standards don’t exactly go hand in hand — fries aren’t really the best thing to recommend as a Mickey Check kids meal. Still, many Disney fans and frequent visitors of the Disney Parks have fond memorable moments of eating McDonald’s Chicken McNuggets or an Egg McMuffin before or after a fun day at a Disney theme park. Especially when they would take a look at the Happy Meal menu and see that there was a Disney prize included!

While many are likely happy that the McDonald’s is getting an upgrade instead of leaving Disney property altogether, others may be disappointed. The McDonald’s at Walt Disney World is a popular road trip stop for those driving to and from Walt Disney World and needing a quick bite. It’s also very popular for families who drive to the Disney theme parks and often like to stop at McDonald’s for a midnight snack before they head back to their Disney Resort hotel for the evening. McDonald’s is set to reopen, but not knowing an opening date could worry some of its frequent visitors.

Do you visit McDonald’s often when you go on Disney trips? Let us know in the comments!