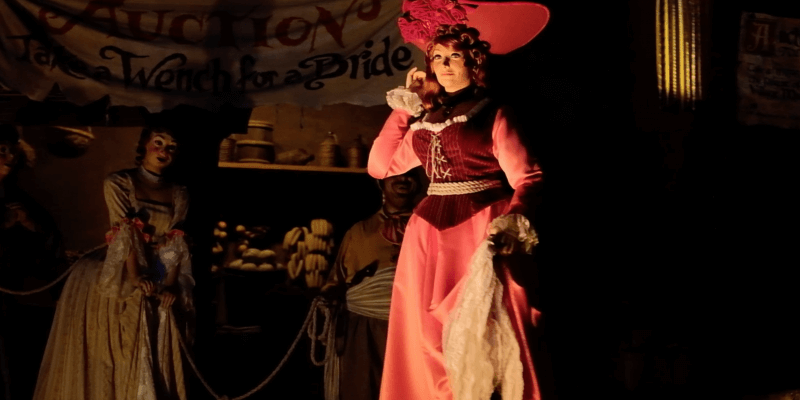 Today Magic Kingdom closes its Pirates of the Caribbean attraction for refurbishment to change the “Bride Auction” scene featuring the infamous Redhead.

Housed in the golden Spanish fort of Castillo Del Morro, the classic attraction is a staple of Magic Kingdom. Based on the equally famous ride of the same name at Disneyland, which was one of the last attractions whose construction was overseen by Walt Disney, this ride is a favorite of many Disney fans. Today marks the beginning of some big changes to the attraction.

WATCH – LAST RIDE WITH REDHEAD ON PIRATES OF THE CARIBBEAN: WATCH – “BRIDE AUCTION” SCENE IN PIRATES OF THE CARIBBEAN:

Back in June of last year, Disney made the announcement that the classic attraction at both Walt Disney World and Disneyland would be receiving some updates during this new ride refurbishment. The most major change includes the altering of the “Bride Auction” scene, giving the notorious Redhead a new role in the attraction.

After the refurbishment, the Redhead’s new job will be assisting with the Mercado auction, where she will help locals by unloading their valuables. Above, take a look at Disney’s concept art for the new scene, which also shows the Redhead is getting a gun.

Disneyland Paris has already debuted their updated scene featuring the redhead, as depicted in the artwork from above. Take a look in the video below.

PIRATES OF THE CARIBBEAN AT DISNEYLAND PARIS:

Refurbishment of Pirates of the Caribbean at Walt Disney World starts today and the new scene featuring the Redhead will debut in mid-March 2018.

It is not yet known when Disneyland’s version of the attraction will receive the update.