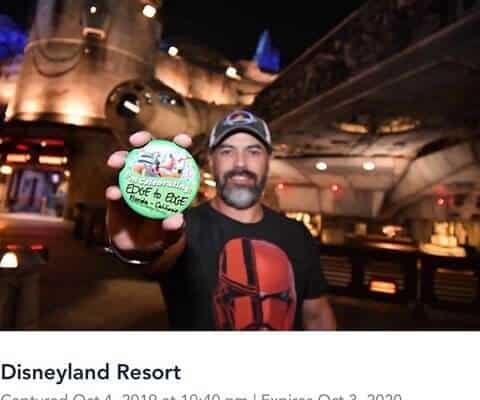 We’ve shared plenty of Disney fans in the past who have attempted Disney Parks challenges. Some have tried to ride every attraction at Disneyland in just one day, and others have attempted a similar challenge on the east coast at Walt Disney World. But this Disney fan challenge takes the cake.

One grownup Disney fan, Rene Herrera, rose to the challenge and visited every Disney and Universal theme park in Florida and California in only one day, in celebration of Force Friday on October 4. The challenge, which he appropriately called the Edge to Edge challenge since he traveled from one Star Wars: Galaxy’s Edge land to another, began at 5:30 a.m. ET and ran through 11 p.m. PT.

This offering allowed Herrera to begin his day at Galaxy’s Edge at Disney’s Hollywood Studios (the east coast version of the land that fans appropriately call Batuu East). This is something he wouldn’t have been able to do until most likely 8 a.m., when regular Extra Magic Hours often let guests into the park. And because California is three hours behind Florida, this gave Herrera some extra time to make this challenge work so he could make it to Disneyland Resort before closing.

But Herrera didn’t just enter each theme park and then leave right away just to say he did. He challenged himself to experience at least one major attraction in every park before moving on to the next one. He was even the first guest to ride Millennium Falcon: Smugglers Run in Florida on October 4 and the last guest to ride the same attraction in California in Batuu West that same day.

“Since I was a boy when I was able to visit WDW I always had the idea in my mind of how cool it would be to go from Florida to California in one day [and] be able to do everything,” Herrera shared, retelling his experience. “But unless you had a private jet it would be impossible since the opening times for the parks were not helpful to cover them and get on a commercial flight, so it was just a dream.”

As Herrera grew up, he says his love for Disney, Star Wars, and movies was often questioned. But in reality, he had depression and anxiety, and it was his love for these fandoms that made him happy. He shared that he had been waiting for something like the opening of Galaxy’s Edge his entire life, and once he found out that the land would be on both coasts, he knew he had to rise to the challenge and try to visit the two lands in one day. Herrera is also an annual passholder, making this challenge more accessible for him.

Herrera is also the co-founder of a nonprofit that helps disadvantaged youth. This year, he and his cofounder brought children from a local children’s home in El Paso TX to Disneyland to visit Star Wars: Galaxy’s Edge, something that has given Herrera hope and inspires him to do even more.

Herrera shared some photos that documented his experience at the Disney and Universal resorts throughout his day. As you can see from the Disney PhotoPass images, the timestamps are included to show that this Disney fan did, indeed, achieve his goal of making it coast to coast in a single day.

Here’s the list of all of the attractions that Herrera managed to experience (in order) while at every Disney and Universal theme park on October 4:

You can watch the entire video of the Edge to Edge challenge that this ultimate Disney fan Herrera shared on YouTube below:

Would you ever attempt this Edge to Edge challenge, or have you already attempted a Disney Parks challenge like this one before? Let us know in the comments!