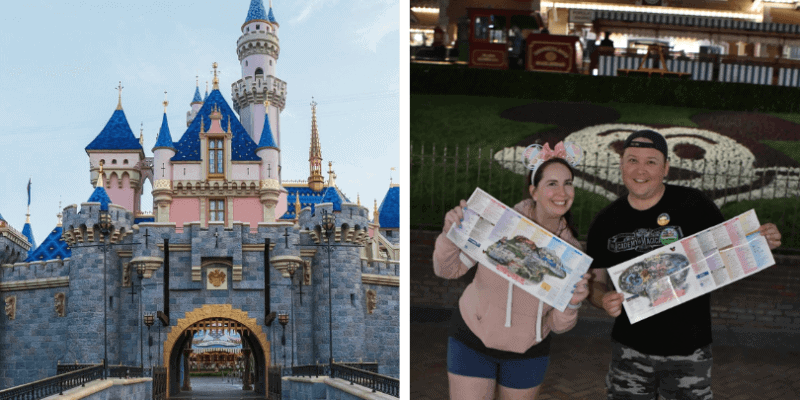 Disneyland is the Happiest Place on Earth, but is it still magical after an entire day of back-to-back rides? One couple rose to the challenge and decided to attempt to ride every Disneyland and Disney California Adventure attraction in only one day, and after hours of park hopping from coasters to carousels, achieved their goal. Here’s how they did it.

Lizzie Sinnott and her husband, Randy, are Disney enthusiasts and Disneyland Resort locals. And like many Disney fans, they just can’t get enough of the theme parks. But a few years ago, the couple found themselves visiting Disneyland just as a place to hang out rather than enjoy the park’s attractions. So they came up with an awesome way to rekindle their love for Disney rides and shows in a challenge they had never done before: consume all the attractions (including rides and shows) at Disneyland park in just one day. Later, they did the same thing at Disney California Adventure. And with the low crowd levels this summer, the couple thought this time of year would be the perfect opportunity for a new challenge: ride every moving attraction at both theme parks in a single day.

“We rode 55 attractions during the day — this is all the rides (defined as something that “moves”) at the Disneyland Resort,” said Lizzie in an email to Inside the Magic. “We didn’t miss any of them, nothing was closed for the day — and we were able to work around the few temporary closures we encountered throughout the day. We even finished before 11 PM — we had over an hour left before the park closed for the night”

Riding 55 attractions in just one day is no easy task, but is isn’t the first time they’ve attempted the challenge. Randy started challenging himself to ride as many Disneyland attractions as he could in just one park day back in 2013, and now the couple enjoys coming up with new and unique ways to experience the Disney Parks.

“While we haven’t attempted this specific challenge before, we have done a couple of other endurance-type challenges at Disneyland,” said Lizzie. “About 2 years ago, we did every attraction (ride, show, walkthru, etc) listed on the Disneyland map in a single day and then did every attraction (ride, show, etc.) in DCA the very next day. This was a bit of a different challenge as it included things that weren’t traditional rides. Although the list for this was longer, the more recent “moving rides” challenge was much more ambitious as we had to get through all the lines for every ride and park hop.”

Throughout the day, Lizzie and Randy documented their adventure on Instagram, which you can see in this slideshow below:

WE DID IT!!!!! Yesterday we did 55 Rides in a single at at Disneyland and California Adventure. It took us 16 hours and 30k steps. We are planning to do an Instagram Live about our day sometime this week as well as a written out blog post. But in the mean time feel free to ask questions in the comments! Here’s a few highlights from the day: ? We finally got to see Peter (the clapping guy) at Disneyland. We even rode Casey Jr and the Teacups at the same time as him! ? We saw Mickey Mouse at ToonTown opening. We told about our quest and he grabbed our hands and walked us to his house for a tour of Mickey’s House! ? When we were riding all the Main Street Vehicles we had a few minutes and got to see Cruella and Dale! ? Special shout out to our friends that met us to do rides with us in the afternoon! @disneylandfoodies @ghasaka @ahasaka @lynnsanity123 @cperl1 @livermorejack @peggsdodisney All in all it was a great day and we hope to do it again! . #disneyland #disneyig #dca #cruella #chipndale #disneyiger #disney #disneylife #disneyfriends #disneyphotography #disneyfan #annualpassholder #disneyap

Even though having such a busy day at the parks is no easy task, Lizzie notes that her and her husband’s day at the theme parks during this challenge was surprisingly smooth. The couple only ran into two temporary ride closures on the day of their challenge: Golden Zephyr in Disney California Adventure and Indiana Jones Adventure. Luckily, both attractions reopened later in the day so the couple could have their chance to ride them.

“We even told Mickey Mouse [about our challenge] when ToonTown was opening and he brought us in for a tour of his house to celebrate,” Lizzie said.

If you’re interested in completing a challenge like this, Lizzie and Randy say to go for it. Keep in mind that they created their own rules: they were allowed Magic Morning (extra morning time in the theme parks when staying at a Disneyland Resort Hotel or a Good Neighbor Hotel), FastPasses, and Single Rider and Buddy Pass lines. So while they park hopped till they dropped and got to experience 55 moving attractions in just one day, the couple still allowed themselves the amenities available to all park guests when completing the challenge.

Lizzie and Randy also shared their attraction to-do lists, which serve as a helpful guide for anyone wanting to attempt a challenge like this:

We love finding new and interesting ways to experience the Disney Parks just like Lizzie and Randy, and we’re thinking we should attempt this challenge ourselves sometime. Let’s all take a note from Lizzie and Randy’s book and try out Disney in a new way. You may surprise yourself with the results!

You can follow along with Lizzie and Randy’s Disney adventures on their Instagram profiles, @Lizzie_in_adventureland and @randysinnott.

Have you ever attempted to ride every Disneyland Resort attraction in just one day? Share your Disney memories with us in the comments!