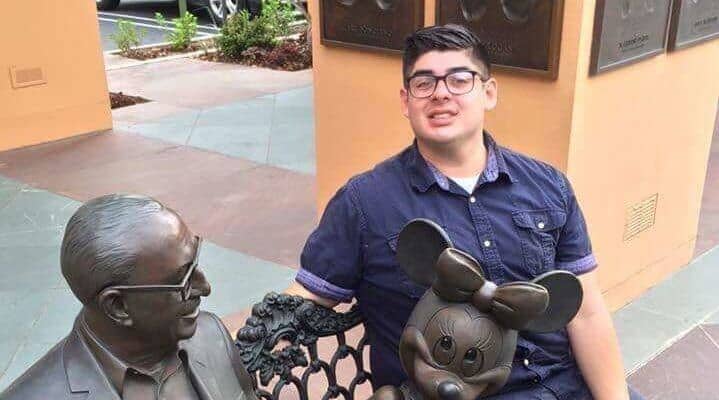 This is one of the nicest stories of Cast Member magic we’ve heard.

Last week, unbeknownst to the rest of the world, Disney World Cast Member Topher Cortez started running. He ran for almost three hours, and the reason will pleasantly surprise you.

Topher and his fellow Cast Member Marisa Sullivan are dedicated to making magic happen for Guests of Disney’s Caribbean Beach Resort. Topher works shifts at the resort hotel in the Concierge at the resort, and last week, he was working in the role of “runner,” the Cast Member who helps when a Guest is locked out of his hotel room. He’s also the one who makes floral deliveries to Guest rooms as needed. He works to make sure the Guest experience is magical.

There’s one more thing Topher was tasked with doing as a runner. He was the Cast Member who would leave his post at Disney’s Caribbean Beach Resort to retrieve items left behind by Guests who don’t have any more days on their tickets that would allow them to go back to the parks. Topher helps find and retrieve lost items and goes the extra mile to make that magic happen for Guests who would otherwise be without their forgotten belongings.

So you see, Topher’s running had nothing to do with a Walt Disney World Marathon. In fact, what Topher was up to came with far less notoriety and much fewer accolades.

But this writer intends to change all that by introducing you to a Cast Member who went so far above and beyond the call of duty, that he deserves all the recognition in the world, especially since he did it all “under the radar.”

A few days ago, Inside the Magic brought you the story of six-year-old Jacob Davis and his family from Titusville, Florida, who took a trip to visit Disney World. Last Friday, the family visited Animal Kingdom, and it was an experience that Jacob will never forget. That’s because during his visit to Dinoland U.S.A., Jacob got to use his Disney gift card to buy a plush green pterodactyl that he lovingly named “Ted.”

The next day, when Topher found out that Ted had been stolen from Jacob while he and his parents were enjoying an attraction at Magic Kingdom, Topher, his fellow Cast Member employees Marisa, and team leader Meghan immediately sprang into action. They didn’t want Jacob to think that such things could happen at the Most Magical Place on Earth, so with a little quick-thinking, a pinch of magic, and a sprinkle of pixie dust, the trio came up with a plan to show Jacob even more Cast Member magic!

Topher says that Meghan and Marisa had the idea to “retrieve” Ted, but in a way that’s a lot like the story of Flat Stanley, who gets to travel all over the world and has the pictures to prove it. They also took some inspiration from Elf on the Shelf. Meghan saw the importance of the trio’s goal being “finding,” not “replacing” Ted, so that Jacob could see that Ted was “lost,”not stolen.

But Ted himself would need a little help with someone who knew his way around Disney’s Animal Kingdom. Meghan and Marisa handed the magical project over to Topher Cortez.

“When they got me involved, I was ecstatic to make it happen,” Cortez recounts. “Because we’re at Disney and everything at Disney has a story, Ted went back to where he came from to find his best friend Teddy, and together they embarked on the most magical journey a couple of pterodactyls can go on.”

So Topher, too, embarked on a journey to Animal Kingdom to find Ted. He says that when he found him just outside the Dinosaur ride at Dinoland U.S.A., that Ted hired him on the spot as the “Official Pterodactyl Photographer.” Ted also introduced Topher to his best friend Teddy before their adventure began.

Topher took the pterodactyl duo to different attractions and Guest areas. And at each stop, Topher made sure to live up to his “Official Pterodactyl Photographer” title, capturing every memory with his camera so that Ted and Teddy could tell Jacob all about their experience.

And other Cast Members were only too happy to assist in the magic.

He photographed the two at the Dinosaur attraction, on a bench on a thoroughfare around Animal Kingdom and during a break when the two dinos shared a Mickey ice cream bar. Later, when Ted, Teddy and Topher went to meet Donald Duck near the Primeval Whirl roller coaster ride where Donald hosts his Dino-Bash, Topher explained the story to another Cast Member who is best friends with Donald.

A Guest in line overheard the conversation and noticed how special their project was. She said “That is so sweet! This is why I come to Disney World!” She then offered to let the three friends go meet Donald ahead of her. So the two dinos got to meet Donald, who happens to be their favorite Disney character. Topher was sure to get pictures of that magic moment as well.

Topher even showed Ted and Teddy the new Disney Skyliner. They were very impressed with the method by which humans could “fly.” But Topher knew he had to hurry if he was going to get Ted and Teddy back to Jacob’s resort hotel room before he returned back from a day at the parks. So he started running again—this time to print out pictures of the adventures of Ted and Teddy so they could be placed in a photo album.

Then he allowed Ted and Teddy access to his computer so they could type a nice letter to Jacob, explaining where they had been so he wouldn’t worry.

When Jacob saw the pterodactyls in his hotel room, he was ecstatic. He loved the letter and the pictures and he was so happy to meet Ted’s new friend too.

That day, Topher not only made magic happen, he preserved a little boy’s special belief in Disney Magic.

Topher has worked at both Walt Disney World and Disneyland in Anaheim, California, for a combined total of several years. He’s a California native but says that over time, he realized Disney World was his home. He’s worked as a Cast Member at three of the theme parks at Disney World–at Kilimanjaro Safaris at Animal Kingdom, as a vacation planner at Magic Kingdom, and as a presenter at Epcot, among other roles. Topher’s friends and family must be very proud of him.

“My job is pure magic,” Topher said. “I work in a role where I have the ability to go above and beyond for my Guests, and I couldn’t be more honored.”

This writer couldn’t be more honored to share the story of Topher’s kindness. When I asked Topher why he made this Cast Member magic happen, his response was perfect.

“I’ve always felt my purpose in life was to make people smile, and that’s why I’m so honored to work for a company where our slogan is ‘We Create Happiness’”, Topher explained. “I get paid to make people happy!”

Topher is currently in school as part of the Disney Aspire Program, pursuing his degree in graphic design and digital media. His dream is to work on the digital side of the Walt Disney Company with Walt Disney Imagineering.

“I have a long journey,” Topher says. “but I have faith that with continual hard work and dedication, my own Disney dream will come true.”

We think Topher is deserving of that dream come true too.