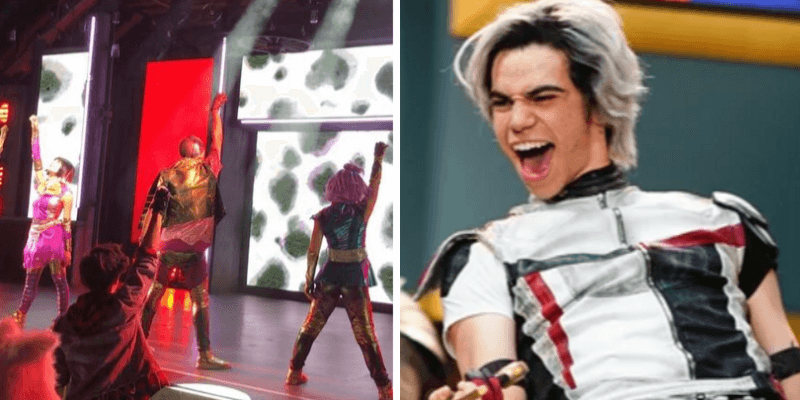 Fans around the world were heartbroken by the passing of philanthropist and Disney Channel star Cameron Boyce earlier this summer.

Since the DescenDANCE Party was announced for both Oogie Boogie Bash at Disneyland Resort as part of the Halloween celebration lineup, many fans have been wondering if Cameron Boyce would have a presence in the interactive show.

While “Descendants” characters show up on the screen, only three of our favorite VKs share messages to the audience — Mal, Evie, and Jay. But that doesn’t mean Carlos (and the late actor who plays him, Cameron Boyce) wasn’t honored during the show. The dancers at the party pay a special tribute to Carlos and Boyce in a heartfelt way that only Disney can do.

At the end of the dance party during the final song — appropriately “You and Me,” the empowering ballad from “Descendants 2,” — the dancers onstage ask the crowd to put up a Dalmatian paw and wave it high in the air. In the “Descendants” films, Boyce played Carlos, the son of Cruella de Vil who is known for her love of Dalmatians. Boyce’s character wears the signature black and white colors in the films, as well, and the Dalmatian spots can be seen onscreen behind the dancers onstage.

Because Boyce dedicated so much of his platform and life to helping others and encouraging his audience to make a difference in the world, it’s so fitting for the dedication to Boyce’s character to take place during “You and Me,” a song about lifting each other up, rising up to the challenge, and being the change.

You can catch this dedication to Boyce’s character during the DescenDANCE Party in Hollywood Land in Disney California Adventure during Oogie Boogie Bash. Remember that Oogie Boogie Bash takes place on select nights this Halloween Time at Disneyland Resort. It’s currently sold out, but we hope the party (and this wonderful “Descendants” dance party) will continue for years to come.

What do you think of this dedication to “Descendants” star Cameron Boyce? Let us know in the comments!