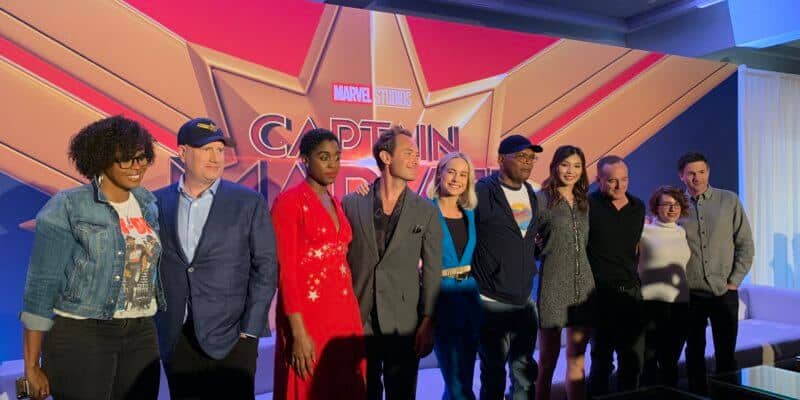 Marvel Studios launches its highly anticipated, female-led franchise into the ever-growing Marvel Cinematic Universe “Captain Marvel. “We thought it was the right time to finally introduce Captain Marvel to the world. She’s one of the most popular characters and one of the most powerful characters in the comics and will now be the most powerful character in the Marvel Cinematic Universe” commented producer Kevin Feige.

Feige continued by saying “We’ve always had powerful female characters and heroes in our films. But having a female Super Hero franchise title character for the first time feels overdue, and it’s something that we have been excited about for a long time, and we can’t wait to deliver it to the world.”

Carol Danvers has always been a character fans have had a lot of love for, and she has a really unique and cool voice in the comics. “What we wanted to do with ‘Captain Marvel’ was to give Carol a chance to carve out her own space in the universe and not fit her into the existing continuity or have her show up suddenly on the scene, but really give her a lot of rich, deep connection to the core of mythology of the MCU. It’s exciting that we get to introduce fans to this amazing character who has such a deep and abiding fan base in the Marvel Universe ” added executive producer Jonathan Schwartz.

Comic-book writer Kelly Sue DeConnick explains the inspiration for her take on the character in her run of “Captain Marvel” comics. “My dad was in the Air Force, and I grew up on the base,” says DeConnick. “When I pitched Marvel to write a run of comics, I basically said my inspiration was Captain Marvel or Carol Danvers as Chuck Yeager. For me, it was about the metaphor of flight and really kind of exploring that and escaping the bounds of our fears and our doubts about ourselves. That was thematically a lot of what I wanted to inject into the character.”

For the comic-book writer, the news that Captain Marvel was going to the big screen was music to her ears. “When they first announced this movie,” says DeConnick, “I knew it would be a huge step forward and would be important in the cultural tone. The message that it sends to little girls and women of all ages is something that renders me inarticulate, truly.” DeConnick adds, “For me, and hopefully, many others who will see the film, she will not just be a female superhero; she will be looked upon as simply a superhero.”

Filmmakers decided to set Carol Danvers’ story in the 1990s, a first for the MCU. In this pre-Avengers time period, cell phones were just phones, pagers were in, internet cafes were the rage and video rental stores still existed.

The next order of business for filmmakers was finding the actor to step into the role of the Marvel Cinematic Universe’s most powerful force, Captain Marvel. And they found that actor in Academy Award winner Brie Larson. “When we found out that Brie Larson might be interested in joining the MCU, we had numerous meetings and pitched her the idea for the film,” recalls Feige. “She was a huge fan of the character in the comic, and one of the highlights of my career at Marvel was introducing her at Comic-Con and having her come out on stage and stand with literally almost every other actor from the MCU. She was at the forefront, which was a great foreshadowing for how audiences are going to embrace Brie as this character.”

The great thing with Captain Marvel is that she is human. There’s a real person in Carol Danvers who gets these incredible powers and has these amazing adventures in outer space. But, as with all the best Marvel characters, she needs to be very human. So, this is not just about somebody who is incredibly powerful and can fly around and shoot photon blasts out of her arms. It’s somebody who’s very human, who’s very vulnerable, and who has multiple dimensions.

Brie was the only choice for Captain Marvel. In the very early stages, as the filmmakers were conceiving the character, they quickly thought of her, because the character was going to be a combination of emotion and vulnerability, strength and power. They saw all those things in Brie from a very early stage. When you go back through Brie’s body of work, you see someone who is an incredible actor and capable of conveying a great range of emotion but is strong in the way you want Carol to be strong.

Brie Larson recalls those initial meetings about the role and film, “When I met with the production team, they showed me some images and they started talking about the legacy of this character. They were interested in exploring the complexity of being female, exploring emotion mixed with honor, which I felt were two things that are really important parallels that coincide within Captain Marvel. This desire for perfection combined with the leniency of having an open heart, and how there’s messiness between those two things. Coming out of the meeting, I quickly realized that this could be the biggest platform I could ever imagine from which to tell this story about the human condition, and walking out I just knew we could deliver something great.”

For Larson, being the lead of the first female Super Hero franchise presented an opportunity to put herself in the forefront of breaking new ground in the Marvel Cinematic Universe. “It’s such an honor to be part of the Marvel Cinematic Universe, and be part of this legacy of characters and storytelling that is so incredibly meaningful to people,” says Larson. “These films are part of what’s shaping our culture, who we are, what morals we value. I don’t think that I fully understood the scope of what it meant in the cultural zeitgeist until the announcement came out that I was going to be playing Captain Marvel. I’ve slowly started to grasp the vastness and gravity of it all.”

Check-out the Captain Marvel press conference video to hear from the Cast with insights and perspectives on many of the messages in the film.

Are you excited to see this movie and it’s entry into the Marvel Cinematic Universe? Let us know in the comments below.