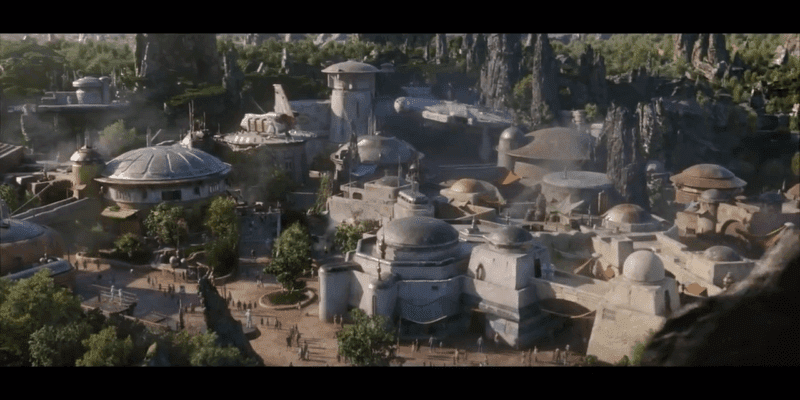 Disney Parks are constantly changing, which means each year we welcome new attractions and occasionally say goodbye to old favorites. There’s already a lot to look forward to at the parks in 2019, with Star Wars: Galaxy’s Edge opening at Disneyland Resort and Walt Disney World, Mickey & Minnie’s Runaway Railway opening at Disney’s Hollywood Studios, and more. Below, scroll through for a list of what’s in store (so far) at Disney Parks in 2019.

First announced at D23 Expo 2017, Mickey & Minnie’s Runaway Railway replaces The Great Movie Ride, which closed in August 2017. The new dark ride is themed after the animated Mickey Mouse shorts, and it’s the first Mickey Mouse-themed ride-through attraction at Disney Parks. The ride features a new theme song created especially for the attraction as well as a new experience Disney is calling “2 1/2-D.” According to IGN, the ride will feature more Hidden Mickeys than any other attraction.

The attraction begins with the premiere of a new cartoon short featuring Mickey & Minnie getting ready for a picnic. As they’re driving, they encounter Goofy conducting a train and through a bit of Disney magic, guests are transported into the movie and onto Goofy’s train for a wild ride.

Mickey & Minnie’s Runaway Railway features the same animation style as the Mickey Mouse cartoon shorts, which has earned mixed reactions from fans. The shorts themselves are quirky and funny, so we’re excited to see how that translates for this new attraction.

Opening in late Fall 2019, Star Wars: Galaxy’s Edge has to be one of the most highly-anticipated lands ever to materialize at Walt Disney World. Immersing guests into the “Star Wars” universe, the new experiences take place on the planet Batuu in a village called Black Spire Outpost.

The land will feature two new attractions — Millenium Falcon: Smugglers Run and Star Wars: Rise of the Resistance. After enjoying the thrilling new rides, guests can stop by Oga’s Cantina for an exotic libation at the well-known watering hole. So far, we know the cantina will serve the blue milk made famous by Luke Skywalker in “Star Wars IV: A New Hope.”

According to Disney Parks Blog, your performance on Millennium Falcon: Smugglers Run will affect other parts of your visit to the land. “Perform with skill and you may earn extra galactic credits, while bringing the ship back banged up could put you on the list of a bounty hunter. End up on Harkos’s list and you may face a problem if you show up at the local cantina,” says Disney.

Continuing the immersive experience, guests at Walt Disney World can also stay at a deluxe Star Wars-themed resort. There’s no set opening date for this new hotel, so it’s possible it won’t open in 2019 along with the rest of Galaxy’s Edge. Whenever it does open, stays will include boarding a starship that comes alive with characters and stories from the “Star Wars” movies. The hotel will seamlessly connect to the rest of Star Wars: Galaxy’s Edge in Disney’s Hollywood Studios.

Debuting in early 2019, this new show brings guests face-to-face with racing legend Lightning McQueen from Disney-Pixar’s “Cars.” He’s eager to share what he’s learned over the years, but when things don’t go according to plan, Lightning McQueen has to think fast to get back on track. Of course, his friends Tow Mater, Cruz Ramirez, and the crew from Radiator Springs are on his side during the exciting new challenge.

Disney’s Hollywood Studios celebrates its 30th anniversary in 2019 and as part of the festivities, the new “Wonderful World of Animation” nighttime show debuts in May. According to Disney, the show will use state-of-the-art projection technology “to take guests on a magical journey through more than 90 years of Disney animation, all beginning with Mickey himself.”

On January 18, the park will unveil a new 30th anniversary logo. In addition, The Incredibles come to Pixar Place as the area is transformed into a Municiberg city block. A party will be held to celebrate the super deeds of Mr. Incredible, Elastigirl, and Frozone, and guests can meet Edna Mode at a special location on Pixar Place. Also, keep an eye out for clues about Jack-Jack’s whereabouts.

Over at Walt Disney Presents, guests have the chance to visit Mike and Sulley, the loveable characters from Disney-Pixar’s “Monsters, Inc.”

Disney’s “The Lion King” celebrates its 25th anniversary in 2019 (and the reboot arrives in theaters, too). Timon and Rafiki are marking the occasion with the “Hakuna Matata Time Dance Party” on Discovery Island, and there will also be three-dimensional photo opportunities recreating scenes from the animated movie.

Epcot’s long-running nighttime show, “IllumiNations: Reflections of Earth,” is set to close in Summer 2019. A new nighttime spectacular will replace IllumiNations in 2020, but before that, a limited-time show called “Epcot Forever” debuts in Fall 2019. According to Disney, the show features classic Epcot songs and “will begin with a spark of imagination that swells into an epic spectacle of fireworks, music, lighting, lasers, and special effects kites.”

“Beauty and the Beast” sing-along show

An exact opening date for this new “Beauty and the Beast” sing-along show hasn’t been revealed, but Disney says it’s coming “soon.” The show was created by Don Hahn, producer of the animated and live-action “Beauty and the Beast” movies, and it will debut in the France pavilion at World Showcase (in addition to “Impressions de France”).

Projected to open in Fall 2019, the proposed 15th Disney Vacation Club property is inspired by Walt Disney’s travels along the Mediterranean coastline in 1935. When the resort opens, DVC Members and other guests can enjoy European grandeur, amazing views of fireworks, and easy access to the Disney Skyliner.

Opening in July 2019, the new Gran Destino Tower is part of the re-imagining of Disney’s Coronado Springs. The tower will be the main entrance to the resort and offer 545 new guest rooms and a two-story lobby.

The biggest new attraction is, of course, Star Wars: Galaxy’s Edge. Scheduled to open in Summer 2019 and expected to draw massive crowds, the new land will debut to Disneyland guests a little earlier than the Walt Disney World version. Disneyland’s version will feature the same two attractions — Millennium Falcon: Smugglers Run and Star Wars: Rise of the Resistance. This land will also feature Oga’s Cantina, marking the first time alcohol will be sold in Disneyland outside of Club 33.

Unlike its East Coast counterpart, Galaxy’s Edge at Disneyland will not include an immersive Star Wars-themed hotel.

Get Your Ears On

Over at Disney California Adventure, this new “Toy Story”-themed attraction joins Pixar Pier. Inspired by the vintage TV show “Woody’s Roundup” featured in “Toy Story 2,” Jessie and an assorted crew of critters invite guests of all ages to take a spin on the new carousel. This attraction replaces King Triton’s Carousel of the Sea, which closed in January 2018 for re-theming.

Festival of The Lion King and Jungle

From July – September 2019, this new show takes guests on a journey featuring Simba, Timon, Pumbaa, and Baloo. The show will take place in a newly renovated Chaparral Theater in Disneyland Park.

There’s certainly a lot of excitement in store for Disney Parks in 2019! We’ll update this article if new attractions are announced for 2019, so keep checking back throughout the year.

Comments Off on What’s new at Disney Parks in 2019? Here are the exciting attractions and more coming up this year