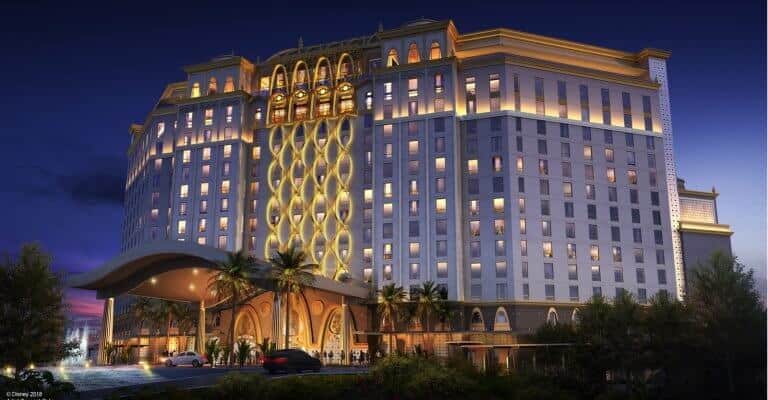 Disney also revealed more details about the new dining experiences that are part of the reimagining of Coronado Springs Resort. Three Bridges Bar & Grill is the dining location that will be located on the island in the middle of Lago Dorado, the resort’s 14-acre lake. Toledo – Tapas, Steak & Seafood is the rooftop restaurant that will open as part of Gran Destino Tower. It will offer both indoor table-service dining as well as seating in the indoor and outdoor lounge.

Take a look at the latest artist renderings of the resort, which showcase the transformation of the resort that is inspired by “the adventurous spirit of great Spanish explorers and historic innovative Spanish artists, writers and architects.” 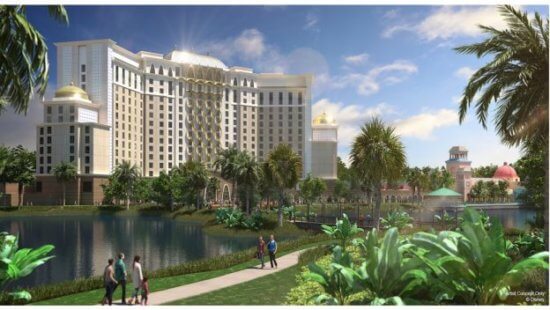 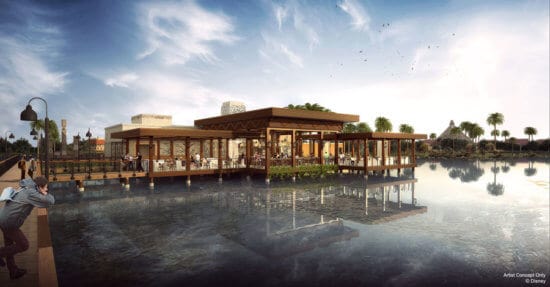 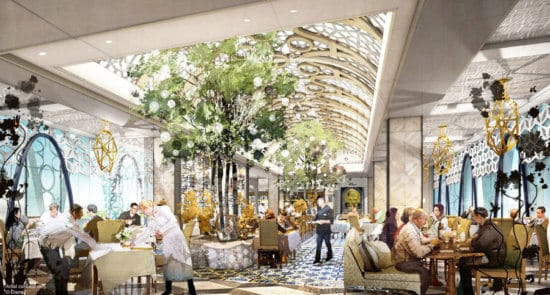 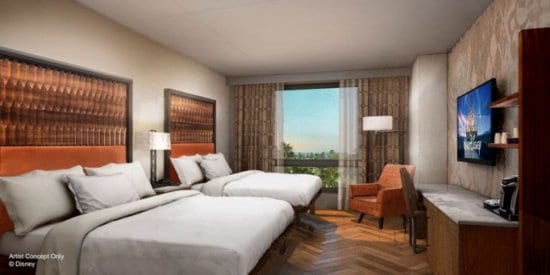 Gran Destino Tower will be complete in July 2019 and guests will soon be able to make reservations for stays beginning that month.

Disney’s Coronado Springs Resort, a moderate resort at Walt Disney World, has been under construction since 2017, when Disney Parks Blog announced the changes that were to come to many of their on-property resort hotels in order to better accommodate Walt Disney World Resort guests.

Coronado Springs is well known for being a “convention resort,” as it commonly accommodates the thousands of people attending conventions at Walt Disney World and the Orlando area each year. Presumably, this 15-story tower will often be occupied by convention guests.

Disney Parks Blog announced today that the 15-story tower will add 545 guest rooms (including 50 suites) to the resort and will also be the new main entrance to the rest of Coronado Springs Resort.

The above rendering showcases the high-peaked ceilings of what will be the new lobby and check-in area at Coronado Springs. This lobby is entirely reimagined, with intricate golden light fixtures and a colorful wall behind what looks to be the check-in and concierge desks. The new lobby will also include plenty of seating for guests to relax and unwind throughout their stay.

Much like California Grill at Disney’s Contemporary Resort, the new tower at Coronado Springs will include a dining location on the top floor. According to Disney’s announcement, this restaurant will be a themed and unique table-service dining location providing incredible views of Walt Disney World.

And now, Disney has released a new flyover video showcasing what will be the new Coronado Springs resort. Check this out:

The rest of Coronado Springs Resort is undergoing massive refurbishments as well, with a refreshing new color palette being added throughout the entire resort. Each of the 1,800 guest rooms is being fully updated with new lighting, furniture, and décor. A new dining location in addition to the tower restaurant will be located on an island in the center of Lago Dorado, the resort’s 14-acre lake. The island will be connected to multiple parts of the resort by numerous walkways.

As previously announced, Coronado Springs Resort is one of the many resorts currently being reimagined or refurbished at Walt Disney World. Disney’s Caribbean Beach Resort is another moderate resort at Walt Disney World that is also undergoing massive refurbishments. This resort’s new table-service restaurant, Sebastian’s Bistro, recently opened, and the resort’s Centertown Marketplace will include waterfront shopping for guests to enjoy. And the addition of the Walt Disney World Skyliner gondola system connecting several resort hotels and theme parks is also impacting resort hotel stays.

Are you planning a trip to Walt Disney World and staying at one of the resort hotels undergoing refurbishments? What are you most excited for at the updated Coronado Springs Resort? Let us know in the comments!