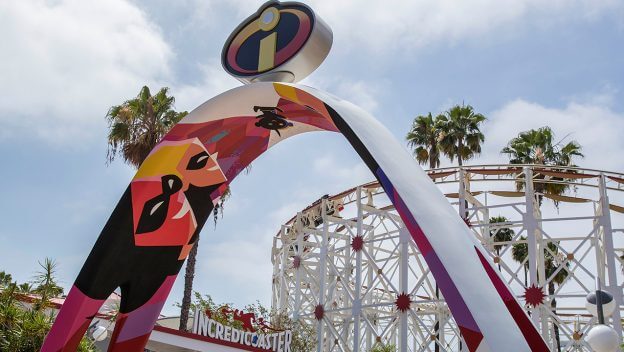 Disney California Adventure at Disneyland Resort has some Incredible new offerings for guests, thanks to the recently opened Pixar Pier. The new land, themed to all of your favorite Disney-Pixar characters, features four themed neighborhoods including the super Incredibles Park.

Disneyland Resort has released a new video that provides a tour of Incredibles Park, including its fantastic dining option, spectacular character meet and greet opportunities and of course, an amazing attraction.

Incredibles Park is the home of Jack-Jack Cookie Num Nums, where guests can enjoy delicious chocolate chip, shortbread and jam-filled, gluten-friendly cookies with a variety of assorted milks.

Guests can also meet with their favorite characters from Disney-Pixar’s “The Incredibles,” including Mr. Incredible, Elastigirl, Frozone, Edna Mode and more.

The main attraction in Incredibles Park though is of course the amazing Incredicoaster, which will take guests on a thrilling race alongside the Parr family. The Incredicoaster replaced California Screamin’ when Paradise Pier became Pixar Pier.

Incredibles Park is joined by Toy Story Boardwalk, Pixar Promenade and Inside Out Headquarters (set to open in 2019), to make up the four neighborhoods of Pixar Pier. Other attractions in the land include the Pixar Pal-A-Round, Game of Pixar Pier, Lamplight Lounge, Bing Bong’s Sweet Stuff, Adorable Snowman Frosted Treats and, when Inside Out Headquarters opens, the Emotional Whirlwind.

Comments Off on VIDEO: Explore Incredibles Park in a new video tour of Pixar Pier at Disney California Adventure