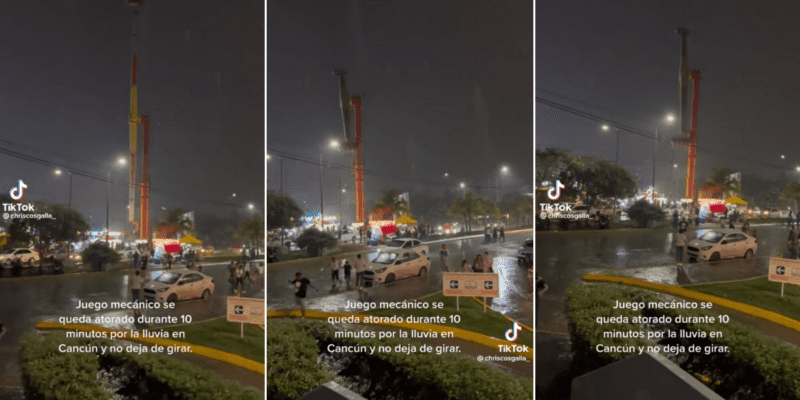 A popular thrill ride suffered a dangerous malfunction, spinning out of control for ten minutes with terrified Guests screaming for help.

Theme park enthusiasts are often looking for the latest thrill ride to experience the rush, adrenaline, and speed, whether that be at their favorite theme park, a local amusement park, or even a traveling carnival or fair. Unfortunately, while being involved in an accident was the last thing that went through Guests’ minds when riding their favorite attraction, they were left spinning out of control after the ride malfunctioned due to reckless operations.

The incident occurred at the Cancun Fair in Cancun, Mexico, where a popular attraction known as “The Hammer” suffered a dangerous malfunction after ride operators decided to keep the attraction running under the rain, which caused damages to the ride and made it spin out of control for over ten minutes with Guests screaming in terror and bystanders running away in fear that the attraction could collapse due to the uncontrollable movement.

The terrifying incident was recorded by @chriscosgalla_, who posted the video on TikTok, racking up over 5.9M views and 418K likes, in addition to being shared nearly 12k times in only three days. The viral video shows “The Hammer” spinning out of control as Guests aboard scream loud enough to be heard from across the street. Fairgoers can also be seen running away from the attraction under the rain, fearing it would collapse.

According to local reports, the rain damaged the attraction’s controls, making it impossible to stop. It is unclear how the attraction was stopped in the end and if any fairgoers were injured in the incident. The report states that local authorities and Benito Juarez Civil Defense elements have not attended the fair to verify the safe and proper operation of the attractions after the incident.

The screaming came from the people on the ride. #fyp #parati (translated)

Undoubtedly, the continued operation of the attraction under the rain was a reckless and irresponsible decision from ride operators.

In contrast, Disneyland and Disney World often close multiple attractions whenever rain conditions are present in the area to ensure the safety of all Guests and Cast Members. Knott’s Berry Farm, a prominent theme park in California located minutes away from Disneyland, has also ceased operations multiple times — even shutting down all of the Parks attractions — due to the inclement weather that has struck California recently.

Do you think the ride operators were reckless in keeping the attraction going in the rain? Tell us in the comments below!