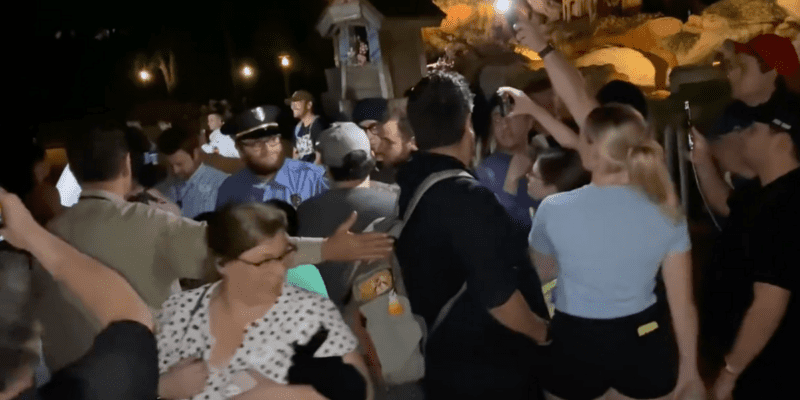 Walt Disney World Resort officially said goodbye to Splash Mountain in Magic Kingdom on Sunday with massive crowds. As a matter of fact, the crowds were so massive as they attempted to board the ride for the last time that they extended outside of Frontierland and into Liberty Square, where Haunted Mansion is located.

The attraction reached historical wait times of more than 220 minutes– which was a Walt Disney World record— and it had Disney World Guests staying until the very end as they said goodbye.

However, as the celebrations took place in the Disney Park, there was a bit of a darker side happening outside of Magic Kingdom.

Disney World fans have been very vocal about their feelings pertaining to Splash Mountain. Millions of social media comments have come in on the topic ranging from sadness to anger to happiness.

Today marks the end of splash mountain at Walt Disney world. It’s sad to see this ride go but I can’t wait to see Tiana Bayou Adventure. In my opinion it was time for a change because you can tell that the animatronic are getting old. #RipSplashMountian

Today marks the end of splash mountain at Walt Disney world. It’s sad to see this ride go but I can’t wait to see Tiana Bayou Adventure. In my opinion it was time for a change because you can tell that the animatronic are getting old. #RipSplashMountian pic.twitter.com/06VzgPTkkn

While some conversations were civil, many others took a dark turn and became nothing more than fights over the internet.

Many claimed that if you were sad about Splash Mountain leaving, “you must be racist.” Others claimed that if you wanted the Disney Park attraction gone, “you were woke.” Some who fell in the middle– being sad that the attraction, which they have grown up with, was closing but also excited about the retheme– were brought into conversations and labeled, as well.

While we aren’t going to share some of the more hateful conversations that have happened on social media, it’s not hard to find that many people– millions upon millions– have opinions on the attraction and its fate.

In the end, Disney elected to change it because of the controversial movie Song of the South (1946), which has forever been put away in a vault to never be seen again, and its relation to the ride, including Br’er Rabbit, Br’er Bear, and Br’er Fox.

Though many wanted the attraction to be saved, Disney decided it was time to move on and has come up with a retheming idea related to Princess and the Frog, titled Tiana’s Bayou Adventure. The new Magic Kingdom attraction is expected to open in late 2024, meaning that fans will have to wait a little more than a year before we get to see the finished product.

Splash Mountain has taken Disney Park Guests on a gentle drift through a colorful Southern bayou along with happy-go-lucky Br’er Rabbit as he looks for his “laughing place,” as Br’er Bear and Br’er Fox are in hot pursuit of the wayward hare. On the ride, you glide by over 100 adorable Audio-Animatronics geese, frogs, raccoons, possums, bees, alligators and other down-home critters as they sing classic Disney ditties, including “Zip-a-Dee-Doo-Dah” and “Ev’rybody’s Got a Laughing Place.”

When the attraction opens, you’ll join Princess Tiana and jazz-loving alligator Louis during Mardi Gras season as they prepare to host a one-of-a-kind celebration for the people of New Orleans.

“This attraction is going to be gorgeous at night,” said Charita Carter, Executive Producer of Relevancy Activations at Walt Disney Imagineering. “Fans will meet all-new, original characters as Tiana realizes she’s missing one key ingredient for a recipe!”

With Splash Mountain gone, there are now just two “mountain” attractions in Magic Kingdom Park: Space Mountain and Big Thunder Mountain Railroad. The Critter Country attraction at Disneyland Park will be closing soon, but a date has not been set. The attraction in Tokyo Disneyland is still up and running with no closure announced by The Walt Disney Company.

What do you think of the banter between Disney fans online about Splash Mountain?