Resellers Hoard $70 Coats, Physically Block Other Guests From Purchasing - Inside the Magic 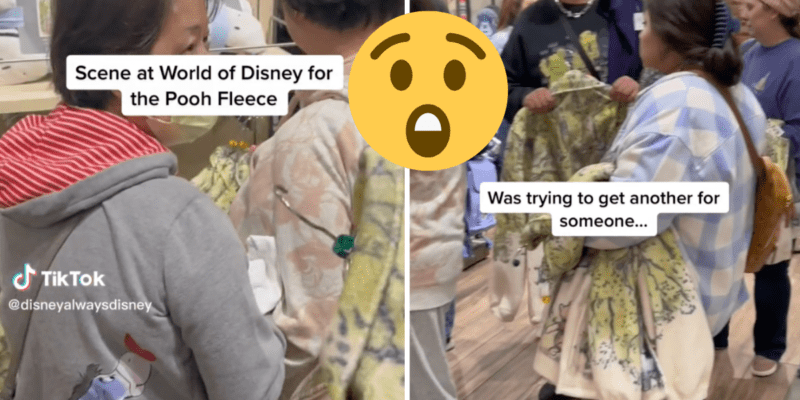 While much of the internet has long been united against adult Disney fans, one phenomenon has turned “Disney Adults” on each other: merchandise resellers. Resellers are known to mass-purchase exclusive merchandise, with many viral images of in-store hoarding inciting fury among Disney fans. Some resellers even sell items that were given away for free!

The Walt Disney Company has attempted to crack down on excessive purchases with buying limits and virtual queues, but this doesn’t always work. Many Guests come in pairs, swapping out to purchase the maximum limit of each item repeatedly.

Fans have repeatedly asked Disney Parks to further crack down on Guests who purchase excess merchandise to sell online at inflated prices. Unfortunately, nothing has stuck.
This week, Guests lined up for a $69.99 Winnie the Pooh fleece jacket at World of Disney in Disney Springs at Walt Disney World Resort and Downtown Disney at Disneyland Resort. Sadly, they were met with crowds of resellers. @disneyalwaysdisney shared this video on TikTok:

In the video, Guests visibly block the shelves where the fleece jackets are stocked. Some Guests carry five or six jackets, while others can’t even grab one.
Disney fans were incredibly frustrated about the video, which received almost 200,000 views. “Don’t you just *love* resellers,” said @rayewashere.
“Literally finding more info ab this jacket on tiktok than from actually calling the resort 🥲,” @back2theeegg.
Others tried to offer advice on finding the jacket to desperate Disney Parks fans. “Fyi… you can also find these in the gift shop at the grand Californian😬there was a lot since not a lot of people know about it ;),” @user323502660 suggested.
“Give it a few months and there’s gonna be plenty of them,” @vivviddly said.
This Winnie the Pooh jacket is currently a Disney Parks exclusive and hasn’t made its way to shopDisney.
Has a reseller ever prevented you from buying Disney Parks merchandise?