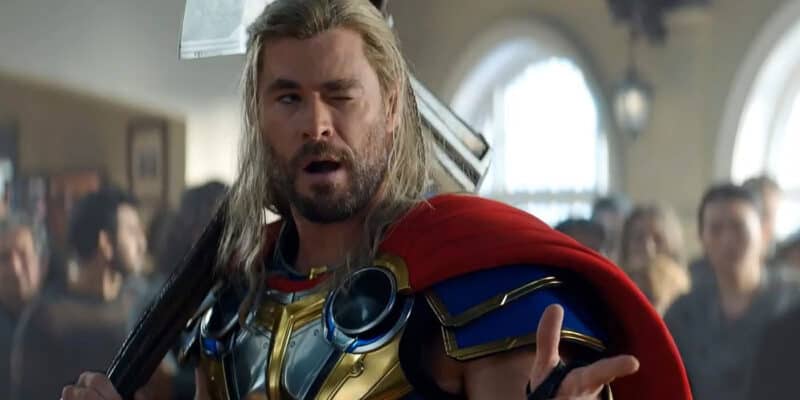 For better or worse, Ant-Man and the Wasp: Quantumania (2023) has been influenced by the Thor franchise!

The character of Thor (Chris Hemsworth) has been a sticky wicket in the Marvel Universe. In the Marvel Comics, he speaks in a very elevated, almost Shakespearean tone and looks like he comes out of a Wagner opera. His first two films in the Marvel Cinematic Universe echo that prim and proper tone, but the third installment breathed new life into the character.

Thor: Ragnarok (2017) was a much-needed and completely different take on the character. Taika Waititi made a complete 180 and brought a kind of humor, irreverence, and gravitas to the character that hadn’t been seen before in any iteration. Ragnarok made Thor (Hemsworth) not just fallible and human but also brought him into his own, showing audiences a more powerful God of Thunder than they’d seen before. Who wasn’t pumped when Thor (Hemsworth) took the bridge, laying low Hela’s (Cate Blanchett) armies while “Immigrant Song” blared?

Unfortunately, this same feeling didn’t quite carry over to Thor: Love and Thunder (2022), but Ragnarok has influenced other franchises within the Marvel Cinematic Universe for the better! Paul Rudd, one of the lead actors in Ant-Man and the Wasp: Quantumania (2023), recently spoke with Empire Magazine and shared how Waititi’s first Thor film led to choices made for the Ant-Man sequel.

As reported by The Direct, Rudd discussed the creative process leading up to Quantumania and how he kept coming back to the Waititi film in his mind:

“I kept thinking about ‘Thor: Ragnarok,’ where it was like, ‘Whoa, we can’t believe this is the third one, it seems so different.’ There was something appealing about doing something unexpected.”

This, along with Director Peyton Reed’s comments about how he wanted to stray away from being the Marvel Cinematic Universe “Palate cleanser” and to make this a real Avengers movie and fans are in for an Ant-Man like they’ve never seen before! The stakes will undoubtedly be higher for this film than for previous entries into the franchise.

Ant-Man and the Wasp: Quantumania smashes into theaters on February 17, 2023.  The sequel stars Paul Rudd as Scott Lang/Ant-Man, Evangeline Lilly as Hope van Dyne/The Wasp, Kathryn Newton as Cassie Lang, Jonathan Majors as Kang the Conqueror, Michelle Pfeiffer as Janet van Dyne, and Michael Douglas as Hank Pym. Quantumania will pit Scott (Rudd) against one of the most formidable Marvel villains in the history of the Marvel Cinematic Universe, setting up the “Kang Dynasty.”

What do you think of Paul Rudd’s comments? Let us know in the comments below!