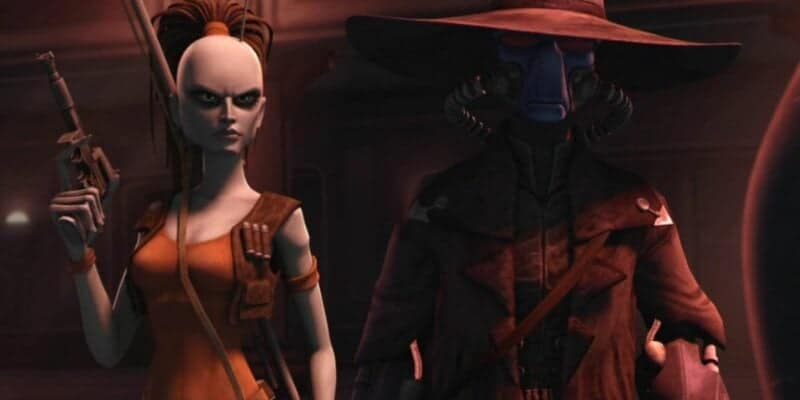 Star Wars is starting to get full of retcons, but there’s one potential possibility that a certain bounty hunter who worked with Jango Fett might not be dead.

Fans have a lot of different bounty hunters to love in the Star Wars universe, and not all of them have happy endings. In Solo: A Star Wars Story (2018), Woody Harrelson’s Tobias Beckett earns his fame by allegedly killing Aurra Sing, an expert sniper who was a ruthless bounty hunter.

Everyone just assumed that Aurra Sing died, but one thing that’s always possible is that a Star Wars character that doesn’t die onscreen can somehow managed to come back from the dead. Darth Maul is the best example of this because while we saw the character cut in half by Obi-Wan Kenobi, the Sith Lord managed to survive.

Aurra Sing is also one of the toughest Bounty Hunters in the galaxy. She worked with Jango Fett. She worked with Cad Bane and Bossk. She even helped Boba when he was starting his bounty hunter career. Aurra manages to get the job done and is always a character to keep your eyes on. Tobias Beckett may have mentored Han Solo, but it’s crazy to accept that she would die by a gunshot in a duel. One fan agrees as they share their theory on Aurra Sing:

Beckett would always take credit for killing Sing because it makes him look much better. Killing someone with a bigger reputation than you always help your reputation in the bounty hunter world. That’s why in Solo, Beckett is seen as a reputable man for the job. Even Beckett’s main advice in the movie is for him not to trust anyone, so it doesn’t seem like Beckett would be a reliable narrator to trust.

One of these days, fans will probably see more of Aurra Sing as she will probably appear in a comic or a show like The Bad Batch. One thing Star Wars needs to do is bring more of the infamous bounty hunters into more stories because no one has made stories focused on Cad Bane, Jango Fett, and Aurra Sing working together, but that would be a crazy team to face.

Star Wars has done great showing small snippets of the criminal underworld, but they can do much more with iconic characters. Fans love Boba Fett but didn’t love The Book of Boba Fett because Boba changed to being a Daimyo and wasn’t the iconic bounty hunter anymore. Fans want to see him as a bounty hunter, and hopefully, one day, we will get to once again.

Do you think Aurra Sing is alive?