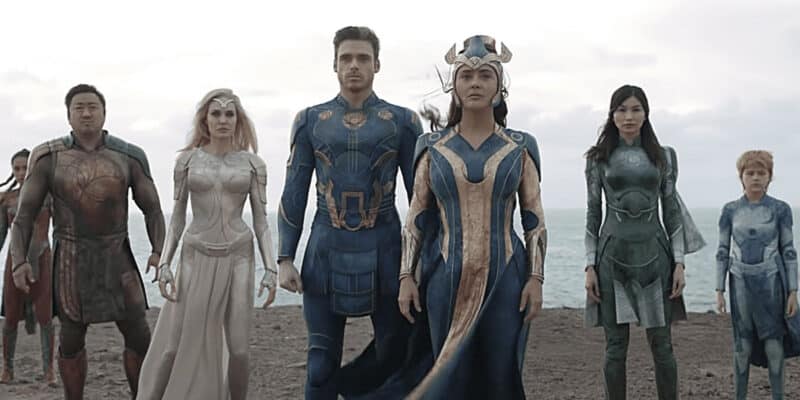 Iman Vellani has made it clear that she isn’t sold on Harry Styles needing to be in the MCU.

As Kamala Khan/Ms. Marvel, Vellani jumped right into acting as one of the newest super heroes in the MCU and has made waves in the community for being a faithful representation of a Muslim super hero while also being a great role model for girls.

Vellani is also a huge fan of the Marvel Cinematic Universe, as she has a lot of knowledge about different super heroes and all of the movies. As a massive fangirl, Vellani definitely has her opinions about the future of the MCU, and she has some thoughts about Harry Styles being Thanos’s brother, Eros.

In Eternals (2021), part of the crew met Eros in the post-credit scene, leaving some fans to believe that Eros might be working to unite other Eternals to stop the Celestials.  Vellani wondered what Marvel would do with Eros and if Styles would return or was just a tease:

“Ohhh, I feel so weird about it! I don’t know. It’s strange. I wonder, I really wonder if they’re gonna go ahead and do something with the character, or if they just teased it for the sake of it. Because I know Chloe Zhao is a big Harry Styles fan. But then you have all of the Harry Styles fandom in the MCU fandom, how chaotic would that be?”

Related: Chris Evans Reportedly Returning to MCU After All

Marvel has been known to make some teases that never become anything important. Mordo in Doctor Strange and the Multiverse of Madness (2022) was expected to have a bigger role based on the post-credit scene for the first movie, but Marvel changed course and gave Mordo a minor role.

For years, Marvel did nothing with Adam Warlock after having the character teased in Guardians of the Galaxy Vol. 2 (2017), and now Will Poulter will be starring as the hero in the third installment in May. Some post-credit scenes have been funny quips, like Bruce Campbell’s gag at the end of Doctor Strange 2, teasing fans for staying to the end. Spider-Man: Homecoming (2017) did the same thing by having Chris Evans do a school video for Peter Parker’s high school, which was funny but didn’t add anything to the MCU.

It seems that Marvel has so many projects releasing that it’s hard to make every post-credit scene matter, and Harry Styles might not end up playing a huge role after all. In the comics, he helped resurrect Thanos, which would be a huge deal if done in the MCU, but it’s hard to tell what Marvel wants to do with the character, and it seems that fans will begin to criticize post-credit scenes more often after moments like Hawkeye’s post-credit scene being five straight minutes of a musical about the Battle of New York.

It’s odd that Harry Styles has a role in the MCU, but all of the Eternals crew hasn’t returned for another sequel or have one confirmed. It seems that Styles’ next debut in the MCU will be reserved for Eternals 2, but that could be years away as they might not be needed until after Avengers: Secret Wars (2026).

Do you think Harry Styles will stick around in the MCU? Let us know what you think!