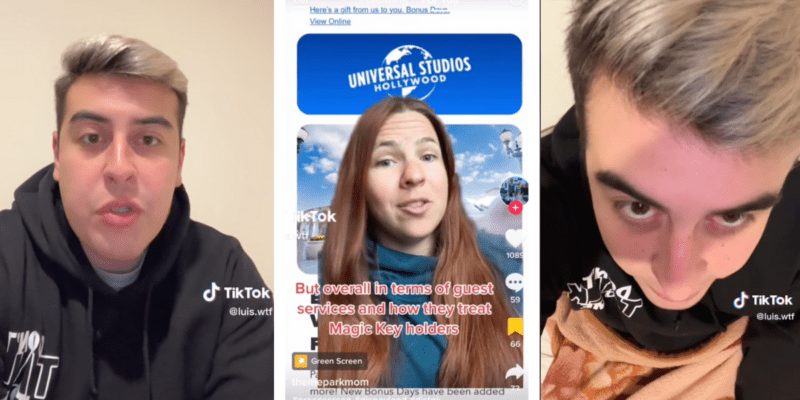 It’s a difficult time to be a Disneyland Magic Key holder as block-out dates and Park Reservations continue to make visiting Disneyland Park and Disney California Adventure more difficult.  Passes sold out the second they went on sale earlier this year, even after former Disney CEO Bob Chapek referred to the Annual Passholders as “unfavorable” Guests.

Last year, we reported a Magic Key holder who asked recently returned Disney CEO Bob Iger to reconsider the 12-day block-out during the holiday season at Disneyland Resort. Many Passholders filmed themselves being dragged out of the Southern California Disney Park to protest the blockout dates.

Though Magic Key holders have since been welcomed back to the Disney Parks, some still voice their discontent with The Walt Disney Company on social media. But others, like Luis (@luis.wtf), are tired of the complaints.

“Literally, no one cares,” Luis argued. “In your video, you talk about how Disney removed dates and blocked dates out of their highest tier Pass, something they’ve never done before, right? Wow, it’s almost like supply and demand is a f**king thing.”

“Then you started complaining about how Mickey’s Runaway [Railway] is set to open in seventeen days, and they haven’t told Magic Key holders how it’s going to work,” he continued. “Um, okay? You don’t work there. Show up to the Park and figure it out.”

Luis also pointed out that Disney Cast Members likely know nothing about Mickey & Minnie’s Runaway Railway yet because they typically find out about significant changes at the same time Guests do.

“The difference between you and I is that I’m not one of the ones that feel entitled to special treatment because I’m a Magic Key holder,” he said.  “As someone who worked there pre-pandemic, we didn’t find out that we were closing the Park because of the pandemic until Guests found out. We found out through the media just like you guys.”

“Let’s be honest, Disney hasn’t done anything to you or any Magic Key holder personally for anyone to go on the Internet and say that they’re treating us, Magic Key holders, badly,” Luis concluded. “Disney doesn’t owe you anything except the Pass that you paid for and the days that are open for you to go. And we were all aware of the blockout days when we paid for them. So what are you complaining about?”

Commenters overwhelmingly agreed. “Disney passholders swear they own a stake in the company 😂 it’s the legit worst,” @IDidSumthingBad wrote.

“Don’t get mad at people like her … let her turn in her magic key…. so I can get it lol that’s called a win-win in my book,” @raiderfan85 joked.

Are you a Disneyland Resort Magic Key holder impacted by blockout dates? Please share your experience with us in the comments.