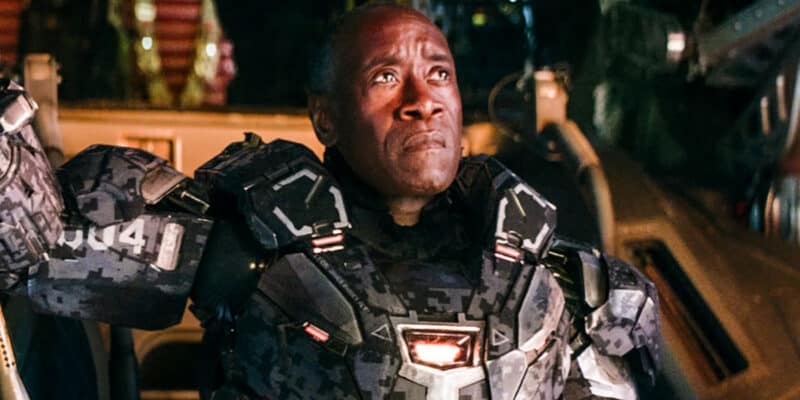 Don Cheadle finally speaks out on his stepping into the Marvel Cinematic Universe.

The character of James Rhodes/War Machine (Don Cheadle/Terrence Howard) has been an integral part of the Iron Man mythos since the days of Marvel Comics. The two have been friends from very early on, and it only made sense that he would appear in the Marvel Cinematic Universe. After all, in those early days, Marvel president Kevin Feige needed to use all the characters they had the rights to.

Terrence Howard played Rhodes in his first iteration in the Marvel Cinematic Universe, in Iron Man (2008). Playing opposite Robert Downey Jr.’s Tony Stark/Iron Man, this version of the character never donned the armor. Instead, there was a tease near the end of the film, showing Rhodes (Howard) looking in at a silver version of the armor, saying, “Next Time, baby.”

Unfortunately for Howard, that next time wouldn’t come. The next time audiences would see the character, Don Cheadle, was the one stepping into the suit to stop a drunken Tony Stark (Downey Jr.) from endangering civilians in Iron Man 2 (2010). Cheadle has continued to play the character since then, appearing in, among others, the rest of the Iron Man franchise, Avengers: Infinity War (2018), Avengers: Endgame (2019), and most recently as a brief cameo in Falcon and the Winter Soldier, and Marvel’s What if…?

As often happens when an actor is replaced in a franchise, nothing was really said in the Marvel Cinematic Universe about the change, leading fans to question why and how it happened. Of course, speculation abounds with this sort of thing, and one such rumor that was touted was that Don Cheadle replaced Howard “without warning.”

In a now-deleted interview with GQ, reported by The Direct, the interview inferred that had done Cheadle just that. The interviewer said it was “famously known” that Cheadle had “Aunt Viv’d” Howard, referencing a similar situation in The Fresh Prince of Belair.  Cheadle was taken aback, responding:

“I Aunt Viv’d him? I did not move Terrence [Howard] out of a role. He was not… They had decided that they weren’t. That was not happening, and it was an open part.”

Cheadle went on to describe the exact process, which was surprisingly abrupt. The star described how he was given two hours to make a decision on the six-movie deal and told that if he didn’t accept the role, they would be moving on to the next person in line. Thankfully for Marvel fans, Cheadle talked it over with his wife and his agent and decided to accept the role. The rest is history.

Don Cheadle will appear as James Rhodes/War Machine again in Armor Wars, which is slated to begin filming sometime this year. Set in a world post-Secret Invasion, Rhodes (Cheadle) will face down the threat that arises after some of Tony Stark’s (Downey Jr.) tech falls into the wrong hands.

What do you think about Cheadle replacing Howard? Let us know in the comments below!