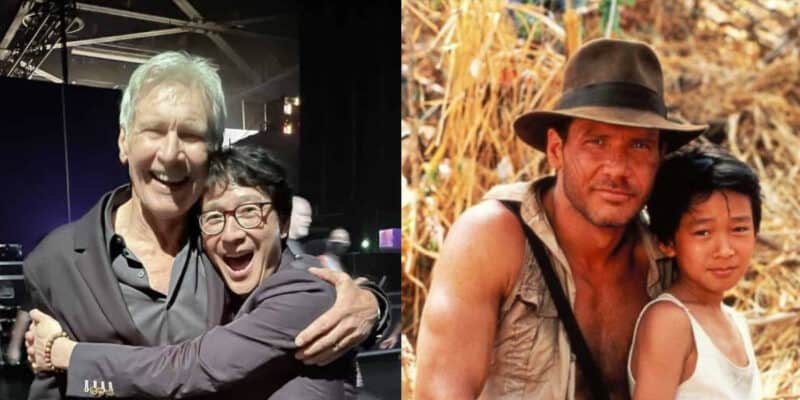 Ke Huy Quan’s return has been a great one!

For child actors in the in the 80s and early 90s, it wasn’t uncommon to see them in an outstanding role, then never see them again. Like Charlie Korsmo from Hook (1991) and What about Bob? (1991) – he has a handful of credits to his name but is currently a practicing attorney. Fans must have thought the same thing about star Ke Huy Quan until recently.

Asian American actor Quan won audiences’ hearts with his outstanding roles in Indiana Jones and the Temple of Doom (1984) and The Goonies (1985). In both, he played a lovable and capable character, and it was a surprise when he didn’t show up in future projects. Fortunately for fans, Quan returned to the screen for another hugely successful film just last year, Everything Everywhere All at Once (2022).

Not only did he return, but he knocked it out of the park! This week, Ke Huy Quan took home “Best Supporting Actor in a Motion Picture.” In an emotional speech, Quan paid tribute to Steven Speilberg, saying:

“I was raised to never forget where I came from and to always remember who gave me my first opportunity. I am so happy to see Steven Spielberg here tonight. Steven, thank you,”

The actor continued, saying that, while he was grateful for that beginning, he often wondered if his early success was “just luck” and that he had more or less peaked as a child actor. That was not the case, as evidenced by his win this week:

“Thankfully, more than 30 years later, two guys thought of me. They remembered that kid, and they gave me an opportunity to try again. Everything, everything that has happened since, has been unbelievable.”

Nearly the entire audience was weeping along with Ke Huy Quan as he accepted this long-overdue recognition in the cinematic arts, but that’s not the only news the star has been making. Variety recently reported on an appearance by Quan on the podcast Happy Sad Confused, in which the actor expressed his desire to make a return to the Indy franchise!

Quan said how much he loved the character Short Round (Ke Huy Quan), adding that while he’s not sure what the character would be up to 38 years later, he would be very open to his return:

“If Disney or Lucasfilm ever come to me and say, ‘We want to do a Short Round spinoff,’ I’m there, man!… I love that character so much, and it would just be incredible to revisit so many years later.”

With an Indiana Jones series in the works for Disney+ confirmed by James Mangold, director of Indiana Jones and the Dial of Destiny (2023), and the confirmation that neither Harrison Ford nor Phoebe-Waller Bridge are to be the stars, could this leave the door open for Short Round (Quan) to return? With Quan’s recent success, it would undoubtedly be a very wise choice!

Related: Indy and Short Round — The Story Behind the D23 Reunion!

Regardless of if that comes to pass, Indiana Jones and the Dial of Destiny comes to theaters June 30, 2023, and stars Harrison Ford as Henry Jones Jr./Indiana Jones, Phoebe Waller-Bridge as Helena, Mads Mikkelsen as Jürgen Voller, and John Rhys-Davies as Sallah. The last Indiana Jones movie adventure for Jones (Ford) will show the archaeologist combating the forces of evil once again to save the artifact and the world!

What do you think about Ke Huy Quan returning to the Indy franchise? Let us know in the comments below!