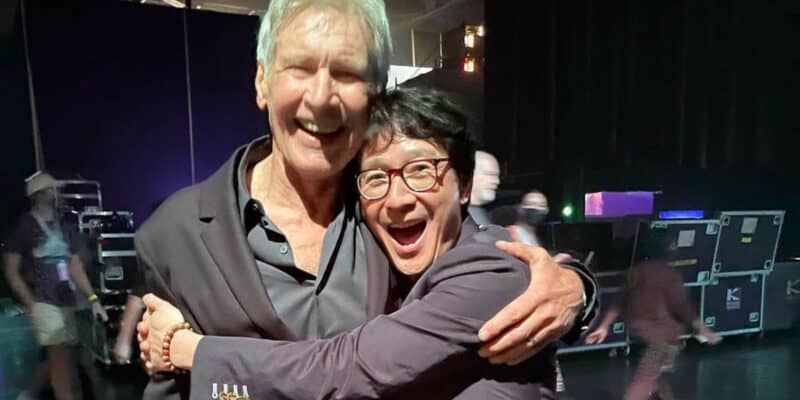 A reunion decades in the making!

Related: “This Is It!”, Harrison Ford Puts an End to ‘Indiana Jones’ Franchise at D23

Indy fans the world over rejoiced to see a picture posted by Everything, Everywhere All at Once (2022) star, Ke Huy Quan at the D23 Expo 2022 celebration this year, showing his reunion with former co-star and friend, Harrison Ford. Many speculated that he may have a role in the upcoming Indiana Jones film, the 5th in the franchise, though those rumors are currently unfounded.

Kyle Buchanan, a reporter with the New York Times tweeted an excerpt from his upcoming article, detailing the sweet reunion between Indy and Short Round:

Ke Huy Quan told me the wonderful story behind that TEMPLE OF DOOM reunion with Harrison Ford. (This is from an article I’ve got coming later this week but I just couldn’t wait to share.) pic.twitter.com/WDG0ayf3yg

In the snippet, Quan says:

“I’m thinking, ‘Is he gonna recognize me? The last time he saw me, I was a little kid.’ And as I get closer, he turns and points his finger at me, and he has that classic, famous, grumpy Harrison Ford look. I go, ‘Oh, he probably thinks I’m a fan and he’s gonna tell me to not come near him.’ But he looks and points at me and says, ‘Are you Short Round?’ Immediately, I was transported back to 1984, when I was a little kid, and I said, ‘Yes, Indy.’ And he said, ‘Come here,’ and gave me a big hug.”

The actor went on to say:

“When I wrapped my arms around him, all those wonderful memories I had on the set came flooding back. It felt so comfortable. It was amazing, and he’s an amazing man – One of the most generous men on the planet.”

Ke Huy Quan starred alongside Ford and Kate Capshaw in Indiana Jones and the Temple of Doom (1984) and acted in just a few films following. With his last American film released in 1996, Quan’s comeback to film has been met with nothing but enthusiasm for his role in Everything, Everywhere All at Once, and fans look forward to his appearance in season two of Loki, on Disney+.

Quan and Ford’s reunion came shortly after a viewing of a trailer for the highly anticipated 5th installment in the Indiana Jones franchise, which will be the first Indy content since Crystal Skull, and is slated to be released on June 30, 2023. Not much is known about the sequel, but, with Ford returning to his iconic role, and Steven Spielberg serving as executive producer, and a score by the irreplaceable John Williams, it seems like all the pieces are in place for a fantastic film!

Would you like to see Short Round return to the Indiana Jones franchise? Let us know your thoughts in the comments below!

Comments Off on Indy and Short Round — The Story Behind the D23 Reunion!