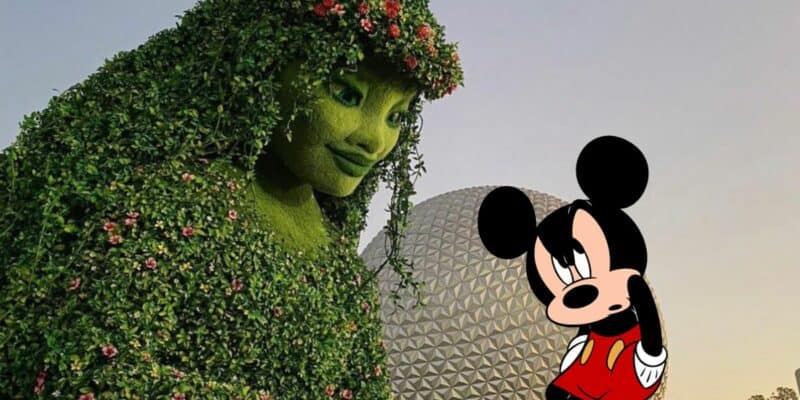 If fans have been keeping up with social media and developments anytime recently, they’ll know that EPCOT is undergoing some massive changes. If the constant state of construction still seen in the Park wasn’t the biggest indicator, the giant figure of Te-Fiti might be. Along with both Bob Iger and Josh D’Amaro making a pilgrimage to Disney’s place of imagination and innovation, the company has announced several new events and additions coming to the Park. However, is Disney getting too involved?

It's not so much that IP in EPCOT bothers me. It's that it seems to be added haphazardly and in a disorganized fashion.

Future World was a masterpiece and demolished it and are now building some random nature park on one side of it (with no symmetry) for an already outdated IP.

A Twitter post from @disneyglimpses ignited a conversation that has many wondering if Disney is getting too much of their intellectual property slammed into EPCOT. Granted, Moana is one of Disney’s more successful films and her Pacific Islander motifs fit greatly with the rest of the princesses at EPCOT’s world showcase, but were fans really demanding a massive statue of a green island goddess in the proximity of Spaceship Earth? @disneyglimpses isn’t just complaining about Disney cramming their IP into a Park that has utilized very little of it in the past, but the fact that EPCOT could slowly be losing its originality in the process.

Disney characters at EPCOT are nothing new, they’re practically to be expected at all Disney Parks, but there has been a recent decline in original material at the Park in the past few years. Consider the drastic change from Norway’s Maelstrom attraction into Frozen Ever After, and although space travel and technology were two very commonplace motifs and themes seen at EPCOT’s Future World, were fans really expecting an appearance from the Guardians of the Galaxy? This probably wouldn’t raise that many eyebrows if it wasn’t for the decline of other longtime standards like Journey Into Imagination, which is still in need of some massive TLC. That’s not to say that more IP at EPCOT is a bad thing, but the way its being utilized is highly debatable.

@LizzieTesch_ raises a sad, but possibly true point concerning the frequency of IP being used to promote Disney rather than what EPCOT originally stood for by writing,

“It’s about what this change means, which is that it was specifically stated today that the themes of discovery, creativity, and exploration (among others) no longer align with the ideals of the park. And that’s sad.”

“It’s my personal theory that Disney doesn’t like Epcot. The execs don’t know what to do with it, so they’re doing the only thing they know how to do, is castle parks.”

Is Disney doing the wrong thing by incorporating more IP into Epcot? Not necessarily. The argument can still be made that the characters they have chosen to incorporate to still represent the themes of discovery, exploration, and creativity. What better characters to use for exploration than Moana and the DuckTales crew, the Guardians of the Galaxy discover new planets and beings in almost every issue of the comics, and Figment is perhaps the most creative mind outside of the Disney Imagineers. The issue isn’t that there’s too much IP, it’s that there’s simply not enough EPCOT.

Do you think Disney characters are hurting EPCOT’s identity? Tell us in the comments below.