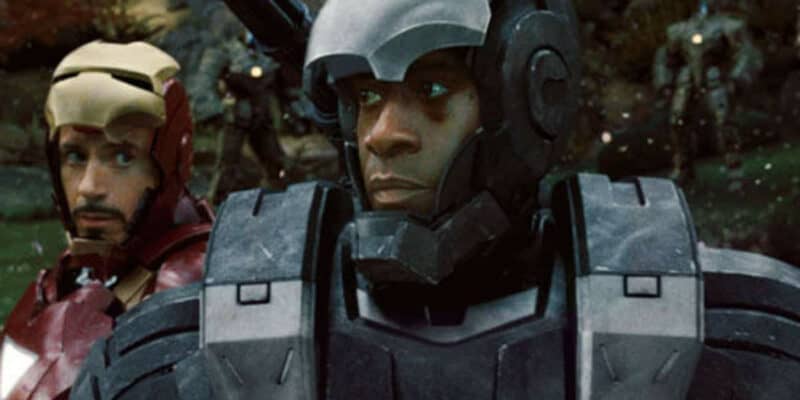 Colonel James Rhodes/War Machine (Don Cheadle/Terrence Howard) has been a part of the Marvel Cinematic Universe since the very beginning. With his debut in Iron Man (2008), the character was established early on as a dependable, firm but fair friend of Tony Stark (Robert Downey Jr.) and a worthy member of the Avengers.

Though a constant presence in the Iron Man franchise from the start, Rhodes (Cheadle) didn’t appear with the other Avengers until Avengers: Age of Ultron (2015), briefly at first, but coming in clutch during the battle of Sokovia, joining with Captain America (Chris Evans), Wanda Maximoff (Elizabeth Olsen), Black Widow (Scarlett Johannsson) and the others to defeat Ultron (James Spader), but ultimately causing the formation of the Sokovia accords.

Cheadle’s character had some much-needed depth added to his character in Captain America: Civil War (2016) when War Machine (Cheadle) is shot down in a misdirected blast from Vision (Paul Bettany) and paralyzed from the waist down. This burden remains with the character through the rest of his appearances in the Marvel Cinematic Universe, with audiences seeing him utilizing futuristic leg braces to keep upright.

A longtime standby for brief appearances and cameos, the character is finally getting his own film with Armor Wars, which, while it doesn’t have a release date, just got a promising update. Cheadle, who recently sat down with Total Film (covered by The Direct), talked Armor Wars, Secret Invasion and the current state of his character, and Kevin Feige’s Marvel Cinematic Universe.

In the interview, the Marvel star discussed how interconnected and “bananas!” the franchise has become. What’s more intriguing, however, is the tease Cheadle dropped regarding Armor Wars:

“It’s bananas! And it’s very expansive. And obviously now that everyone can show up in everybody else’s story… I mean, I’m in ‘Secret Invasion.’ So I’m in Sam [Jackson]’s show. There’s a part of that, that kicks off what happens in Armor Wars.”

This will be the first major update for the film since Marvel Studios shifted production from a streaming focus to a feature film for the project. Cheadle went on to say that he hopes the franchise “doesn’t get spread too thin” but that he’s excited to explore the character further in the upcoming film:

“I don’t think we’ve ever really dug into him, and now it’s an opportunity to really explore his emotional life, his interior life, his relationships, his trajectory, where he wants to go, what his challenges are. Obviously, you have to pay off the Marvel stuff. And be in the lore of the mythology of the character and the MCU in general. But trying to really build out this character and make him a three-dimensional dude… is what the goal [is]. So I’m excited about that.”

Cheadle’s next appearance will likely be in Marvel’s Secret Invasion, set to start streaming sometime this year on Disney+. The series will star Samuel L. Jackson as Nick Fury, Ben Mendelsohn as Talos, Cobie Smulders as Maria Hill, Kingsley Ben-Adir as Gravik, and Don Cheadle as James Rhodes/War Machine.

What do you think of this Armor Wars update? Let us know in the comments below!