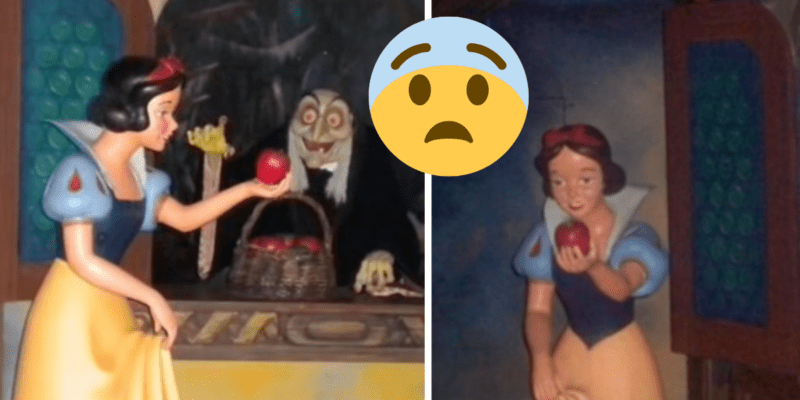 When Walt Disney opened Disneyland Park in 1955, he insisted that the original Disney Park would never be finished. As culture and technology evolve, Disney Parks will be ever-changing.

Still, Disneyland’s Fantasyland contains the most historic, original attractions of any Disney Theme Park around the world. It provides the rare opportunity to walk in Walt’s footsteps and ride the attractions Walt did, some of which are permanently closed at Magic Kingdom and Disneyland Paris.

While most fans look forward to riding these classic Disney Parks attractions, others view them differently. On TikTok this week, @valleygirlfantasy shared an easy way to see Disneyland Resort dark rides in a “horrifying” and “uncanny valley” way: flash photography.

She shared a few flash photos from Snow White’s Enchanted Wish in Fantasyland at Disneyland Park. One image featured the Evil Queen in her witch-like form.

“It’s too bright. It’s too much. We can see too much. Our innocence is shattered,” she said.

In another image, a Snow White animatronic climbs up a staircase. The camera flash is less bright but still makes the photo a bit creepy: “It appears more like an accident. Like that other one was full center, flash reflecting off of everything and that idea of seeing too much.”

Then, the TikToker shared the scariest image of them all. “It’s like we’ve stumbled into a room, and we’re seeing something weird in a corner, and elements of it that would be kind of naturalized in that theatrical light are really standing out,” she said. “Like, the sculptural wrinkles of her skirt are really bothering me here. That is… ugh… It’s terrifying.”

The TikToker explained that flash not only makes human-like animatronics look creepy, but reveals every crack in the paint and more mechanical elements of the dark ride.

“Things like that, that make things look industrial, are all part of ruining the illusion and destroying our innocence,” she concluded.

Have you ever taken a flash photo on a Disneyland dark ride?