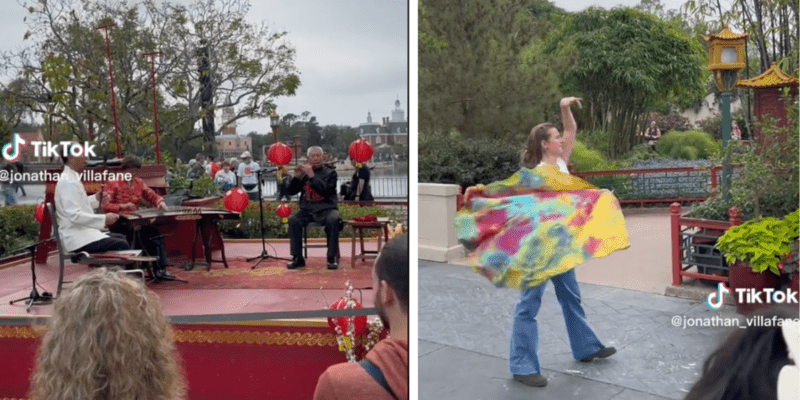 The holidays are the most wonderful time of the year at The Most Magical Place on Earth. Every Disney Park at Walt Disney World Resort celebrates the festive season in unique ways, but none do it like EPCOT!

Home to EPCOT International Festival of the Holidays, all the countries around the World Showcase offer seasonal eats, performances, and cultural demonstrations. Perhaps the most famous is The Candlelight Processional, one of Walt Disney’s favorite traditions at Disneyland Park that was later brought to EPCOT at Walt Disney World Resort.

While Guests line up for hours to see celebrity narrators and the Voices of Liberty in EPCOT’s American Adventure, other performances are more casual. One of those daily performances is in EPCOT’s China Pavilion!

At one of these recent performances, bystanders were shocked when another Guest began to dance dramatically along to “Jingle Bells.” @jonathan_villafane shared a video of the dancer on TikTok:

“When white women visit China,” the Guest joked in the video’s caption. He also referred to the woman as a “Disney Adult.”

Related: Each Holiday Kitchen Coming to EPCOT International Festival of the Holidays

Unexpectedly, the video received over 600,000 views, 100,000 likes, and over one thousand comments. Most suggested the woman was wrong for making another culture’s performance about herself.

“It’s the fact that they’re already performing, and she felt the need to put the focus on herself, but she’ll just say ‘I was just so in the moment,’” reads the most popular comment from @dothehappything.

“Girlie just saw shen yun and decided it was her time to shine,” @deadlyprincessj joked.

“She couldnta done that in germany or something 😭,” @chummygumby wrote.

Do you think it was right for this Guest to dance with the performers? Let us know in the comments.