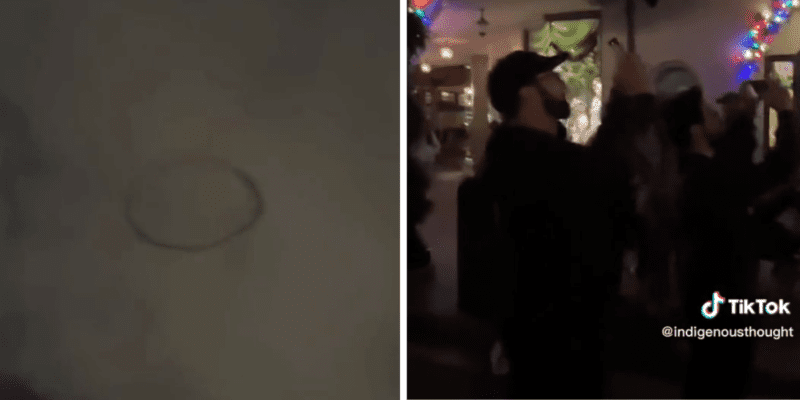 Disneyland Resort is The Happiest Place on Earth, home to thousands of magical moments daily. Of course, the “magic” of the Disney Parks can be explained by the themed ambiance, kind Disney Cast Members, awe-inspiring technology, and maybe a little bit of pixie dust from other Guests.

But this week, a group of Guests visiting Disneyland Park, Disney California Adventure, and Downtown Disney found themselves perplexed by something unexplainable: an unidentified flying object, or UFO.

TikToker @indigenousthought shared a two-minute video from the Disney Park, which appears to show a ring among the clouds in a dark California sky:

Throughout the video, the Guest swears in shock as he observes the alleged UFO. “Everybody’s freaking out like crazy out here,” he says, then points the camera at groups of other Guests filming the sky. “Everybody is super tripping out.”

Many commenters made fun of the Guest for thinking it was a UFO. “There’s no swearing at DisneyLand!!!!!!” joked @wutangchild.

But others took the Guest seriously. “It’s OBVIOUS WHAT IT IS. How many videos we gone see to know,” @slimm.jimmy wrote. “2021 they declassified UFOS and y’all still lost in the sauce.”

“That not the first time,” @momocloudie said.

The commenter was correct. On March 8, 2020, a strange, seemingly extraterrestrial ring was spotted in the sky above Disneyland Resort. A video captured of the incident was later deleted.

The giant black ring observed in the 2020 video was likely a cloud of black smoke leftover from World of Color, a nighttime spectacular at Disney California Adventure. But the ring reminded some of the alien ship piloted by Thanos’ allies in Avengers: Infinity War (2018).

According to ibtimes.com, this ring-like UFO was once spotted in San Diego and back in the late 1950s at an Army base in Virginia. Scott Waring of ET Data Base wrote that a United States Army Private reported a black-ringed object in the sky in 1957. The United States government didn’t declassify his report until 1966.

Disneyland Resort is just over 300 miles from the famed Area 51 military base in Nevada. So who knows? The magic… and the aliens… are out there for those who wish to believe.

What do you think of the viral Disneyland UFO? Do you believe in aliens?