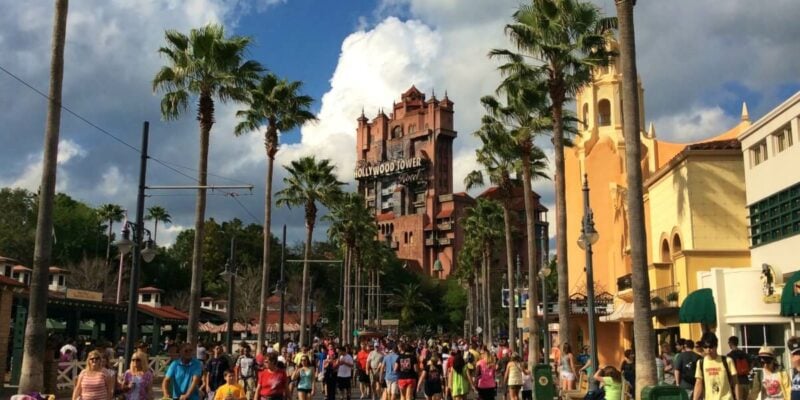 Walt Disney World Resort is home to many iconic attractions that have stood the test of time.

Magic Kingdom, EPCOT, Disney’s Animal Kingdom, and Disney’s Hollywood Studios all have attractions that have been in each theme park since the very beginning.

Though many rides have moved on to “retirement status,” like The Great Movie Ride, Snow White’s Scary Adventure, Mr. Toad’s Wild Ride, Maelstrom, ExtraTERRORestrial Alien Encounter, and the Studio Backlot Tour, just to name a few, there are others that simply have become iconic landmarks for Disney Park Guests to visit each and every time.

One of those attractions that has been open for more than 20 years is none other than Rock ‘n’ Roller Coaster Starring Aerosmith.

Rock ‘n’ Roller Coaster first opened on July 29, 1999 at Disney’s MGM Studios (now Disney’s Hollywood Studios) on Sunset Boulevard and debuted with a dedication ceremony that included Aerosmith. This was the first roller coaster at Walt Disney World to feature multiple inversions and the ride vehicles had 120-125 speakers and 24 sub-woofers, perfect for the big-time rocker.

Many fans and insiders have speculated for years now that a retheme could be coming to the roller coaster. Aerosmith isn’t nearly as popular with the younger generation, and there have been many who have called for a retheme.

A dream retheme of the coaster, started by fans, has always been to change the coaster to a Powerline attraction. Powerline is the band in the iconic film, A Goofy Movie (1995), but Disney addressed those rumors in its closing announcement, as well.

“The rocktastic attraction will resume its super-stretch limo rides in Summer 2023,” Disney said.

First of all, if this were going to be a retheme, we’d likely be looking at a longer timeframe than just a matter of months. Though a retheme from the outside lookin in seems easy, it takes a lot more time than one might think.

In addition, these comments from Disney show us that the attraction doesn’t seem to be going anywhere, nothing that the “super-stretch limo rides” will return. While it’s still entirely possible that a retheme could come to the coaster, this particular closure does not look to be the time.

Disney is already in the midst of several more construction projects. TRON Lightcycle/Run is expected to open in spring of 2023 after years of construction. In addition, Splash Mountain is set to close permanently in January of 2023 to make way for Tiana’s Bayou Adventure, which is set to open in late 2024. Over at EPCOT, the World Celebration Neighborhood– which will house Journey of Water, Inspired by Moana— is being completed and will open in 2023, as well.

What do you think of these rumors of a retheme for the Disney World coaster? Let us know in the comments!