Is Goofy Taking Over Tower of Terror? - Inside the Magic 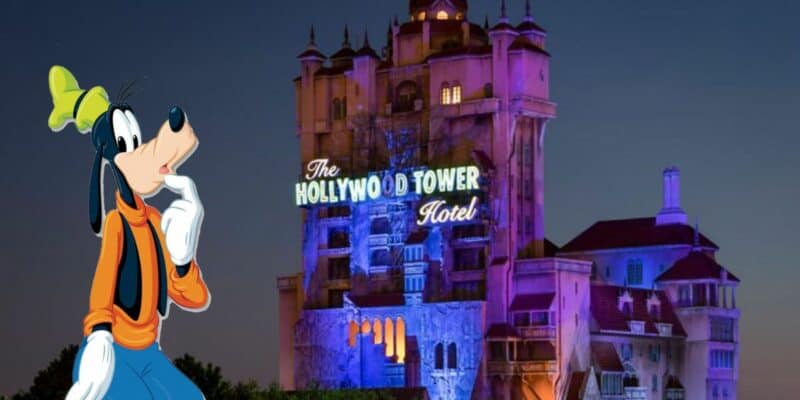 The Twilight Zone Tower of Terror is a prominent fixture at Disney Hollywood Studios at Walt Disney World. For a long time, it was even a prominent advertising feature for the Park. With the Disney Parks undergoing so many changes, could the popular thrill ride be next on the chopping block? It might not be such a far-fetched idea.

Disney has played host to a wide variety of strange properties at Hollywood Studios. From the Teenage Mutant Ninja Turtles and the grotesque cast of Dick Tracy, Disney’s animated cast of characters aren’t the only ones to share the spotlight.  However, Rod Serling’s sci-fi/horror series from the ’60s doesn’t exactly fit with the classic Disney aesthetic. That being said, it has resulted in one of the Park’s most iconic rides. However, Disney is in the midst of a massive period of change, especially in the Parks. With rides like Splash Mountain scheduled to get a controversial re-theme, it’s enough to make some fans wonder which ones might be next.

A speculative video has been circulating TikTok suggesting that A Goofy Movie’s Powerline should replace Aerosmith at Rockin’ Roller Coaster. However, one user suggests a better and more probable option to incorporate more Goofy into the Park. Instead of replacing the famous rock group at the coaster, Goofy could be heading to the Tower of Terror.

TikTok user @bryantheba suggests that Disney is slowly giving the tower a re-theme with Goofy in the lead role. He points out new merchandise featuring Goofy’s elevator repair company, as well as Guests getting more interactions with him, suggesting that Disney is indeed “testing out” a subtle re-theme. Additionally, recent videos of both Goofy and Max entertaining Guests in the queue and surrounding area can be found on YouTube, providing further evidence to this idea.

At the rate things are happening with other attractions, Goofy might be taking over once the Twilight Zone’s contract is up. Naturally, a Goofy-focused layover would take away the entire attraction’s spooky atmosphere, at least in part, but that doesn’t mean it would be such a bad idea.

While there are some very vocal fans of the ride’s current layout, the attraction has been recently re-themed around the Guardians of the Galaxy at the Disneyland Resort. The idea of a new premise might not be that far away. As stated previously, this is all purely speculative, but the evidence still stands. Either way, there’s nothing wrong with having more Goofy, in or out of the ride.

Do you think Goofy should take over the tower? Tell us in the comments below!