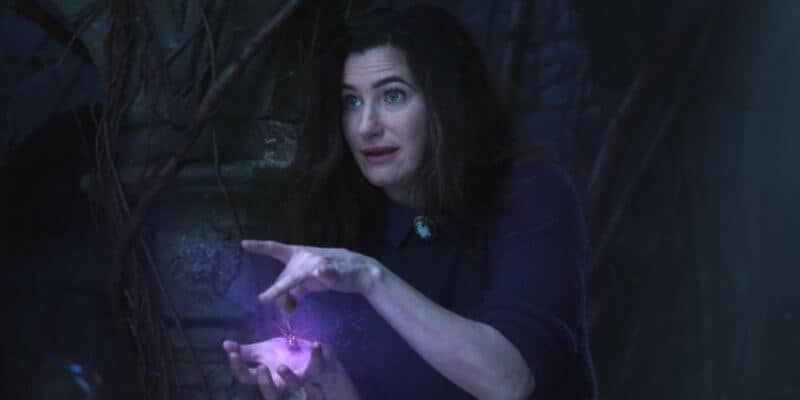 Many Marvel fans were disappointed when the hit show Wandavision didn’t receive a second season. The first Disney+ original Marvel series was a knockout success, a hit with both critics and audiences alike. The series also was very popular in the award circuit, meriting 23 Emmy nominations, and bringing home awards for costuming, design, and music for that smash hit, “Agatha All Along.” Though it is unfortunate, after Phase Four, it’s easy to see why there won’t be a season 2.

Following the events of Doctor Strange in the Multiverse of Madness (2022), Wanda Maximoff/The Scarlet Witch (Elizabeth Olsen) showed her immense power again. After going on a rampage through the Multiverse in search of her children, Wanda (Olsen), realizing the error of her ways (a few hours too late), decides to destroy the Darkhold once and for all and, presumably herself, though that last point is up for debate. There is another witch in the Marvel Cinematic Universe that’s still around, however…and she’s getting her own series!

Agatha: Coven of Chaos will follow the extremely popular villain from Wandavision, Agatha Harkness, played by the outstanding Kathryn Hahn. While the plot is being kept tightly under wraps, it’s safe to assume that there will be a few references to Wandavision, as Emma Caulfield Ford, the actress who played Sarah Procter, will be reprising her role from Westview. This character also shares a name with one of the young women accused in the real Salem Witch Trials, which may point to a more prominent role!

Ford’s role is the only one besides Hahn that has been disclosed, but the cast is jam-packed with talent, including Ford, Hahn, Aubrey Plaza, and more. Just this week, one more heavy hitter was added to the Coven of Choas cast list: Broadway veteran and three-time Tony Award winner Patti LuPone has officially been added to the Coven roster.

Related: ‘WandaVision’ Sequel Ramps Up as Unprecedented New Decisions Made For the MCU

A report from Deadline claims that a Marvel Studios representative declined to comment on LuPone’s role but indicates that she may be playing yet another witch in the coven. While it is unlikely that the Broadway star will flex her musical theatre skill in the show, her talent as an actress is undeniable. It will add yet another formidable cast member to an already exciting cast.

The new series Agatha: Coven of Chaos premieres on Disney+ sometime in 2023, and will star Kathryn Hahn as Agatha Harkness, and Emma Caufield Ford as Sarah Procter, with Aubrey Plaza and Patti LuPone in undisclosed roles within the Marvel Cinematic Universe.

What do you think about LuPone joining the cast? Let us know in the comments below!