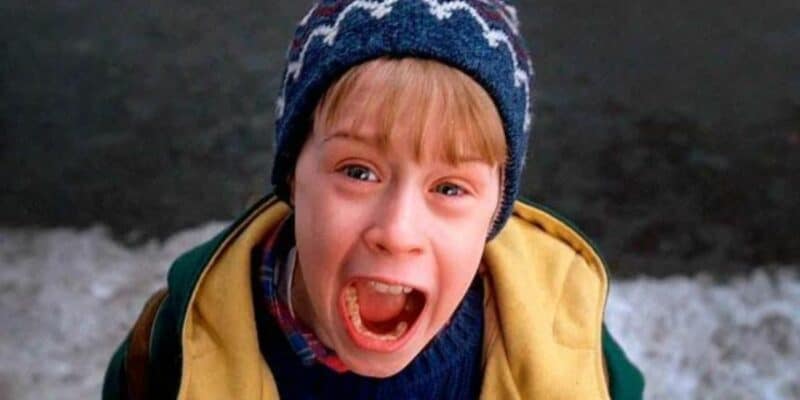 How are there suddenly six movies in the Home Alone franchise?! Well, just like the Wet Bandits, the studio clearly doesn’t know how to quit, despite all the danger signs. But while the series started out with some high-quality theatrical releases, it’s straight-to-television galore in no time!

So here are all six Home Alone movies ranked from worst to best.

When Disney announced that it was releasing a new Home Alone movie onto Disney+, we couldn’t help but feel incredibly pessimistic. After all, the last three movies in the series are hardly classics like the first two, so what could a reboot do to remedy those disappointments?

Well, it turns out we were wrong about one thing — Home Sweet Home Alone (2021) is not a reboot. Not that it really matters, because it’s still really bad. Young Max Mercer (Archie Yates) is insufferably arrogant and rude, and he’ll have you rooting for the “bad guys” within minutes.

Jeff McKenzie (Rob Delaney) and Pam McKenzie (Ellie Kemper) are hardly Wet/Sticky Bandits Harry (Joe Pesci) and Marv (Daniel Stern), though, as they only break into Archie’s home to retrieve a family heirloom. But even putting all that aside, the whole thing just feels really cheap.

5. Home Alone: Taking Back the House

Home Alone: Taking Back the House (2002) is the weirdest entry in the Home Alone series, and though we’ve ranked it one place above Home Sweet Home Alone, it’s the one film on this list that’s bound to leave a really bad taste in your mouth.

The reason? Well, apparently the McCallisters are back, and we say “apparently” because each and every single one of them has been recast! Why didn’t the filmmakers just go the extra mile and have them be completely different characters, rather than try and spoil the first two movies?!

It doesn’t matter, though, because it seems that no one takes this film seriously. We’ve nothing against Mike Weinberg (Kevin McCallister), and it’s always fun to watch a kid take out the crooks at Christmas, but there’s a reason why Daniel Stern refused to reprise his role as Marv…

Unfortunately, as we arrive at fourth place, things haven’t improved much. Home Alone: The Holiday Heist (2012) might be as harmless as Home Sweet Home Alone and Home Alone: Taking Back the House, but if you’re looking for a fun movie, you won’t find it here.

Sure, the film is entertaining enough, as Finn Baxter (Christian Martyn) takes on Sinclair (Malcolm McDowell) and his band of not-so-merry crooks, but there’s really not much else to sink you’re teeth into with this uninspired Home Alone sequel.

By this point, the series has gotten away from itself in terms of quality so much that you might forget what brought you here in the first place. But don’t worry, because at least there’s some improvement as we continue to back-track through this series!

Finally, some light at the end of the tunnel! Well, sort of. Home Alone 3 (1997) isn’t all that bad, but it’s not all that great, either. Alex Pruitt (Alex D. Linz) is the first kid to replace Kevin McCallister, and he’s a somewhat worthy successor.

Stuck at home with chicken pox, Alex is unknowingly in possession of a microchip that a group of international thieves previously misplaced at an airport. But breaking into his home to retrieve it isn’t going to be easy, because Alex has even more engineering talents than Kevin McCallister!

A huge suspension of disbelief is required here, but it would be a lie to suggest the same thing isn’t needed for the first two movies. Home Alone 3 has some pretty fun traps, and though it takes a bit of a dip in quality, it’s nothing compared to the three movies that follow.

Trudging our way backwards through the Home Alone series wasn’t easy, but getting here was definitely worth it. Home Alone (1990) is a bonafide classic, and it marks director Chris Columbus’ first efforts in the Christmas movie territory.

After being left home alone by his family over the Holidays, Kevin McCallister thinks his Christmas wish has come true, until he realizes that his house is the soon-to-be-target of local crooks Harry and Marv, who are known as the Wet Bandits.

But as soon as they step inside, Holiday hijinks ensue, because it turns out that Kevin is a very resourceful kid, as he transforms his large home into one giant boobytrap. Home Alone is both a hilarious comedy and heartwarming film, and fortunately, it was followed by another great entry.

To many fans, Home Alone 2: Lost in New York (1992) is probably the last true entry in the Home Alone series, and who wouldn’t want to check out here? The 1992 sequel has it all — Kevin lost in the Big Apple where he comes face to face with Harry and Marv all over again. Yes, please!

The film does what many sequels do — it offers up a much bigger playground with higher takes (the Sticky Bandits plan to rob a toy store whose Christmas Eve takings go to the local orphanage every year) — but it pulls it off and then some.

Home Alone 2: Lost in New York is also just as iconic as its 1990 predecessor, another rare feat for most sequels. But not only is it more heartwarming than the first film, it’s a lot funnier too — Harry and Marv must secretly be cartoon characters to survive what Kevin has in store this time!

All the Home Alone movies are currently streaming on Disney+.

How would you rank the Home Alone movies? Let us know in the comments down below!