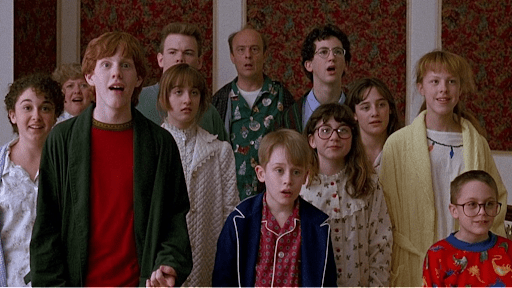 “KEVIN!” – The famous line from the fan-favorite holiday film, Home Alone (1990) starring Macaulay Culkin as Kevin McCallister, as he is unexpectedly left home alone after his family rushes out of the house to try and catch the plane for their upcoming vacation.

Though this movie is a classic, fans everywhere have been coming up with theories ever since its initial debut 30 years ago. One of which proves that The McCallister Family is actually a cult.

That’s right — some fans believe that The McCallisters are more than just a big, crazy family and are actually a cult. For starters, why didn’t they call a friend or a neighbor when they realize Kevin wasn’t with them? Instead, they opted to call the police, which the theory suggests is pretty weird and could be because the McCallisters don’t actually have any friends.

But it’s not just the parents that act weird — it’s the children, too. The theory explains how the second Fuller and his sister see Harry, they are instantly terrified, despite him being dressed as a cop. Also, Buzz, Kevin, and their cousin are all convinced that Old Man Marley, the neighbor next door, is the Shovel Slayer. The fear seen in all of the children is an example of how to keep “kids in line” and “isolated from the outside world.”

Related: The Wet Bandits May Not Be the Actual Villains of ‘Home Alone’

Though this is strictly a theory and no one from the film actually proved this to be true, it is a very interesting point of view.

What do you think of this Home Alone theory? Is The McCallister Family actually a cult? Let us know in the comments below.

Comments Off on Is the McCallister Family From ‘Home Alone’ Actually a Cult?