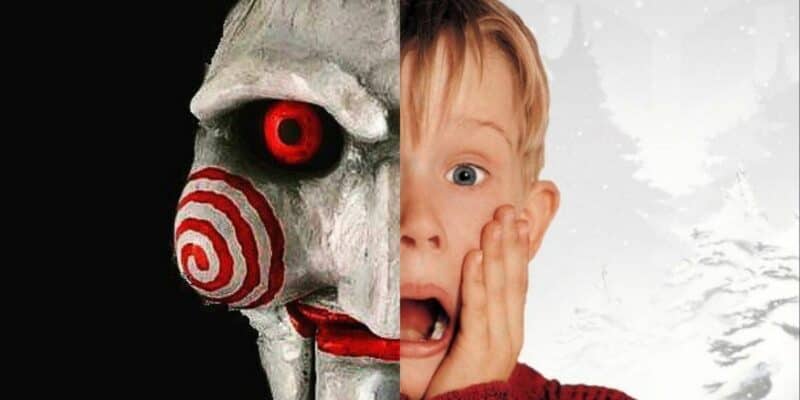 It’s the holiday season, which means it’s time to start watching some of our favorite holiday movies!

We all know that the fan-favorite holiday film, Home Alone, tells the story of Kevin McCallister (Macaulay Culkin) as he is unexpectedly left home alone after his family rushes out of the house to try and catch the plane for their upcoming vacation.

And it is no secret that Kevin is an extremely smart, and brave, kid as he protects his home from the Wet Bandits by setting up a variety of traps around the house. And that is exactly why this fan theory proves Kevin McCallister grows up to be Jigsaw from the horror movie franchise, Saw.

The fan theory connects Kevin McCallister to John Kramer/Jigsaw from the horror movie franchise, Saw, as they both have a similar personalty trait — violent tendencies. In Home Alone, Kevin is seen harming the Wet Bandits with his traps set up around the house, which can be argued to be similar to those of John Kramer/Jigsaw.

While the harm Jigsaw inflicts is meant to give his victims a new outlook on life, he must also enjoy the torture and pain he’s causing to some degree. It isn’t too difficult to believe that Kevin’s mind could snap after hearing devastating news and revert him back to his childlike ways, just with a more violent aspect.

All of the pain that both Kevin and Jigsaw cause people come from similar tactics, too. Kevin crafts elaborate traps for the Wet Bandits to fall into over and over again. Meanwhile, Jigsaw designs similarly intricate games for people to play, some of which even have similarities to early traps or moments from Kevin’s childhood. One similarity that particularly stands out is Kevin being scared of the furnace in his basement and imagining it coming to life and how Jigsaw burned someone alive in a furnace in Saw II. This could be Jigsaw using some of his own childhood fears as inspiration.

But it’s not just the personalities that connect Kevin to Jigsaw.

According to the theory, Kevin McCallister was last seen in 1992 in New York during Home Alone 2. It’s possible that after he experienced the east coast, once he grew older, he decided to move out there — specifically to Pennsylvania. Once he moves, all Kevin would have to do is change his name to John Kramer and the rest of the timeline would fall into place.

Both Kevin and John Kramer also have identical features, including blue eyes, blonde hair, and “a similar jawline”.

And even though some timing aspects may not fully line up, Saw creator James Wan actually supports this theory.

Home Alone, as well as the newly released reboot, are now streaming on Disney+. If you aren’t yet signed up for the streaming service, you can get started here.

Do you think Kevin McCallister grew up to be John Kramer/Jigsaw from Saw? Let us know in the comments below.