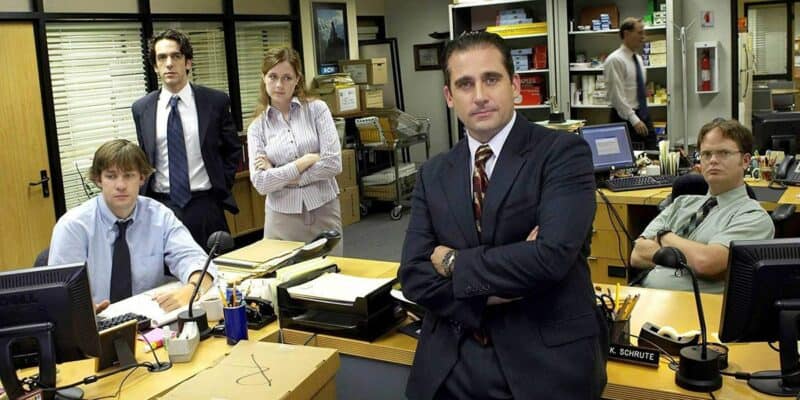 The Office (2005) is a phenomenal show. While it got off to a shaky start, taking perhaps too much inspiration from the original British version (Season 1 is for the most part a scene-by-scene, word-for-word reboot), it quickly found its footing and lasted for nine whole seasons.

There are many characters in The Office, whether original, newcomer, or guest appearances. But what would the show be without its recurring full-time Dunder Mifflin employees? In fact, they’re so beloved by fans that they’re getting their very own LEGO set later this year!

So, we’ve decided to rank all the original characters from the US version of The Office, from the least funny to the most hilarious!

Phyllis Lapin-Vance (Phyllis Smith) is by no means the worst character in The Office, but for us, she’s the least funny of all the originals. While she contributes to a bunch of chuckles throughout the show, referring to her husband by his full name (Bob Vance) gets annoying pretty fast. On the flipside, she’s an oftentimes warm character who looks out for her co-workers.

Angela Martin (Angela Kinsey) is easily one of the most awful people in The Office, whether it’s because she cheats on Andy Bernard (Ed Helms), or all the cruel remarks she makes to her co-workers, most of which are more annoying than funny. But that doesn’t mean we don’t think she’s funny, or that she’s a very strong personality whom we can’t imagine the show without!

Despite being engrossed in his crossword puzzles most of the time, grumpy old Stanley Hudson (Leslie David Baker) does, on the rare occasion, come bursting to life, whether it’s when he’s telling people “Shove it up your butt!” or laughing hysterically at Michael Scott’s roasting of his employees! His most infamous scene, however, is, of course, “Did I stutter?!”

Meredith Palmer (Kate Flannery) has many memorable moments throughout The Office, whether it’s getting her head trapped in a bag with a bat in the Season 3 episode “Business School”, getting run over by Michael Scott (Steve Carrell) in the Season 4 double-episode “Fun Run”, or shaving all her hair off in the Season 9 episode “Lice”! You probably wouldn’t want to sit next to her, though.

Oscar Martinez (Oscar Nunez), “accountant extraordinaire”, is one of the few characters in The Office to have a pretty dramatic character arc, going from being a closeted gay man to having a full-blown affair with Angela’s husband, Senator Robert Lipton (Jack Coleman) — sorry, State senator. But is he funny? Well, have you seen him try to do a Southern accent in Season 6’s “Murder”?

Creed Bratton (Creed Bratton) is an enigma wrapped in a mystery. His cartwheel in the Season 7 episode “Ultimatum” is his greatest moment in The Office, but there’s no denying just how weird and creepy he is. Showing up to work drenched in blood, speeding off in his car when Michael Scott jokingly tells him “There’s been a murdah”… Yep, Creed Bratton has got to be the Scranton Strangler!

Speaking of the Scranton Strangler, Toby Flenderson (Paul Lieberstein) remains one of the prime suspects among fans, as there are many clues throughout the show that lend to the possibility. But either way, we love Toby, largely because he’s a down-on-his-luck divorcee who is bullied relentlessly by Michael Scott. He also has “a very calming presence” about him.

If we were discussing the meanest people in The Office, Kelly Kapoor (Mindy Kaling) would be right up there with Angela Martin. But as we’re ranking them by how funny they are, the fact that Kelly is essentially social media incarnate is a good thing. Her back-and-forth with Ryan Howard (BJ Novak) is also hilarious at times. Don’t agree? Well, we have a question — how dare you?!

Kevin Malone (Brian Baumgartner) is the most lovable character in The Office, and he’s also one of the more witty of the bunch (although he hates “witty” banter). Kevin enjoys many memorable moments in the show, with the most stand-out being the chilli scene in Season 5’s episode “Casual Friday”, which is so iconic that it has even been re-created in The Office‘s very own LEGO set!

Like her love interest-turned-husband Jim Halpert (John Krasinski), Pam Beesly (Jenna Fischer) can be a bit of a mixed character, in that she’s either really funny or really annoying. Pam’s best seasons, however, are Season 5, when she joins the “Michael Scott Paper Company”, and Season 6, during which she learns that Michael Scott, of all people, is dating her mother!

For the first eight seasons of the show, Jim Halpert and Dwight Schrute (Rainn Wilson) are arch enemies. And while Jim’s pranks go too far at times and often appear unprovoked, once in a while, Dwight will remind us why he deserves it! Jim is one of the lead characters, alongside Pam, Michael, and Dwight, and he stares at the camera a lot more than anyone else (add shrug here).

Ryan Howard goes through many identities throughout the first eight seasons of The Office (he’s sadly absent in the final season, with the exception of the first and last episodes), but he’s never not “Ryan”. He goes from shy temp to the youngest VP in Dunder Mifflin (a “meteoric rise”, he might say), only to later become “the temp” again, albeit a very pretentious version. And we love it.

Yes, we have taken some liberties, because Andy Bernard is not an original character. But he becomes such a part of the Dunder Mifflin family, that it’s hard to imagine he wasn’t always there. Andy is the most animated character in the show, and between his musical talents and his daddy issues, he’s a side-splitting personality. Just don’t ever talk to us about Andy Version 2.0.

Dwight Schrute is best described as “perfectenschlag“, because he ticks all the boxes as a comedy character — he’s insane, nerdy, fair, firm, physical, loyal, weird, dastardly — he’s got it all. His funniest moment, though? Well, it’s a tough one, but for us, it has to be Season 9’s Christmas episode “Dwight Christmas”, in which he plays the elf “Belsnickel”. Impish or admirable?

Of course Michael Scott is at the top spot! Could you imagine him any lower? Surely not. Is he the most “hilarious” character in The Office? Yes, but stop calling him Shirley. It’s impossible to recall all of Michael’s greatest moments (there are literally hundreds), but Season 6’s “Scott’s Tots” might just be one of his finest, or at least as empty promises go, by far his most generous.

Who are your favorite characters from The Office? Let us know in the comments down below!