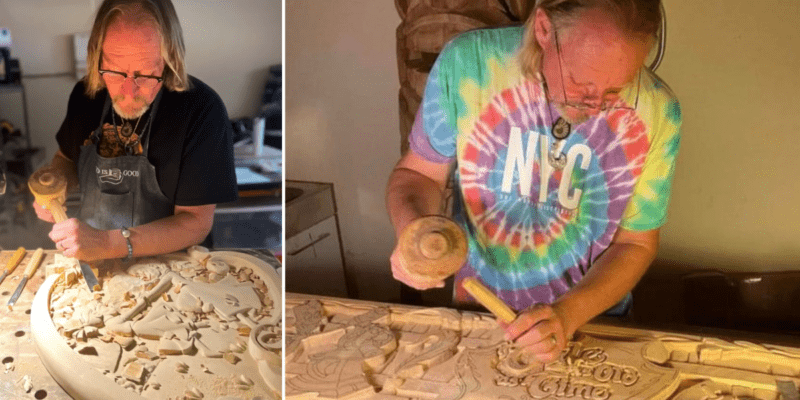 If you’ve ever dreamed about owning a piece of Disney history or, even better, learning from a former Disney Imagineer, now’s your chance!

Bringing Disneyland Resort to life in all its glory took the work of thousands of Cast Members and Disney Imagineers, each master of their own trade. From architects to artists, engineers, plumbers, construction workers, cooks, carpenters, and so many more, the legacy of thousands of hands that helped shape Disneyland Resort into the Happiest Place on Earth will live in the hearts of Disney fans forever.

However, most of us have, at least once, dreamt of hearing all the stories and learning all the secrets from Disney Imagineers like Bob Gurr, Joe Rohde, Bob Weis, and Tony Baxter. Fortunately, Raymond Kinman, a former Disney Imagineer, has become the “Woodcarver Guru” and now dedicates his life to creating breathtaking custom pieces and passing along all his tips and tricks to master the art of woodcarving.

Raymond Kinman’s woodworking career reportedly launched in the late 70s after he accidentally volunteered to hand-carve a sign for his friend’s restaurant in the Lake Tahoe town of Kings Beach, California, despite never having picked up a chisel in his life at that point. The sign kicked off a decades-long career for Kinman, who hand-carved designs for rides and restaurants in the Disney Parks, and, most recently, creates hand-crafted pieces of art, some inspired by Disney, for private collectors, with some pieces reaching a $50k price tag.

Some of his work at Disneyland includes the wooden sign for the Indiana Jones Adventure Outpost, which can no longer be found at the California theme park, and the Country Bear Playhouse Sign, another defunct Disneyland attraction.

Kinman has also found a new passion in teaching, as he offers three-day workshops at his home in northern California, for which participants, some of who travel across the globe to learn the trade from the “Woodcarver Guru,” pay $1,450 to hone their skills. Many students have never carved wood in their life, to which Kinman comments, “When they leave, they have their project and are saying, ‘I can’t believe this came out of my hands.’ Giving a student permission to try is really all they need.”

The former Disney Imagineer says he never talks about numbers when it comes to his work, “I don’t even think about them. They’re kinda irrelevant to me.” “I have no idea how long it takes me to carve any given project,” he added. “I don’t keep track of my hours…it interferes with the creative process and I don’t really care how long something takes. I care about doing my best work…”

Would you like to learn from this former Disney Imagineer? Let us know in the comments below!