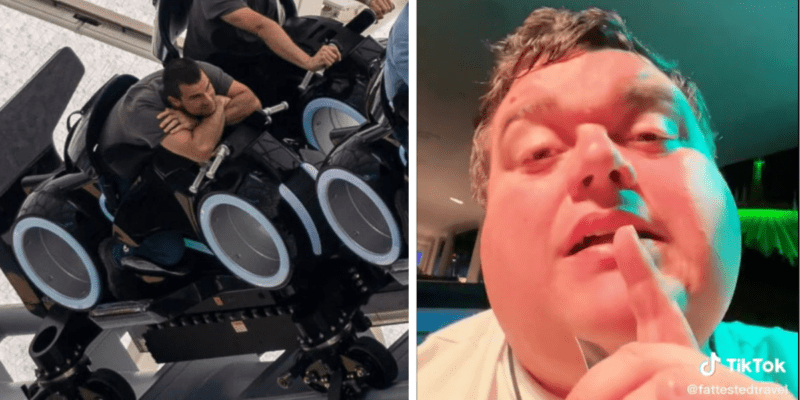 We’ve reported extensively on ride testing, which Guests have spotted from the Tomorrowland Transit Authority People Mover. One Theme Park influencer, Jason Vaughn of @fattestedtravel, noticed the ride testing and has a request for the Disney Park:

Help guys! Can we get @Disney Parks to let me fat test Tron while im in town? Not the ride, i just need to test the seat for the bog folk! Help me get their attention!

“Can you help me get ahold of Disney Parks?” Vaughn asked his TikTok audience. “I don’t want to test the ride. Can I test the seat while I’m here and let the people know if it’s going to be plus-size friendly?”

“I have my concerns, but it looks so cool,” Vaughn continued. “I just want to let people know… That way, your Guests will not be disappointed if they come all the way out here just for that ride and can’t ride it.”

The video received thousands of views and likes, but Vaughn hasn’t received a response from Walt Disney World Resort. He posted an update video a few days later:

Replying to @christinamurphy502 thank you to everybody that tried to help me get a hold of @disneyparks to Fat Test Tron. I promise I will be back at magic kingdom as soon as possible to give it a shot. #magickingdom #disneyworld #plussizetravel

Vaughn thanked his audience for the support and promised that even if he doesn’t get to test the seat early, he will try TRON Lightcycle Run as soon as possible when it opens.

“I would love to get on the media list and come for that,” Vaughn said. “I’m just saying, you need more fat people, Disney. Representation.”

Commenters agreed and continued to ask Walt Disney World Resort to invite Vaughn to test the ride. “Representation matters! Please add him to the media list,” @thejadenplayz wrote. At this time, Vaughn hasn’t updated with any response from Disney Parks.

Inside the Magic will report any updates on TRON Lightcycle Run, coming to Magic Kingdom in the spring of 2023.