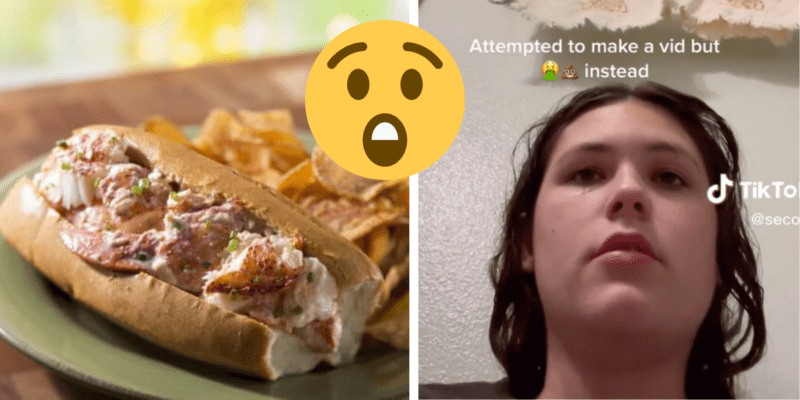 Inspired by social media influencers, Disneyland Resort Guest @secora decided to make a video featuring everything she and another Guest ate at the California Disney Park. Unfortunately, it was cut short:

The video focuses on the lobster roll, which she calls “not bad for amusement parks,” and gives a six or seven out of ten. Later, though, the Guest regrets her decision to try Disneyland seafood.

The Guest’s TikTok suddenly ends with her sick in the bathroom. “I wanted to make a cute video of everything we ate at Disney and instead I got food poisoning,” she wrote. “Any guesses on what it was?”

Though she didn’t clarify that the lobster roll made her sick initially, the Guest liked every comment that suggested that was the case. She later explained that it was the only thing she ate that her fellow Guest didn’t, and he didn’t get sick.

“Why did I think that was a good idea 😭” she later replied.

Other Guests reported similar experiences.  “I got food poisoning from a disney lobster roll too🤮,” @lainemariej wrote.

“My husband had cross contamination from a food allergy spent t hours in the parking lot throwing up,” @desertluvr76 recalled. “We got free tickets.”

It’s best to report food poisoning, from Disney or elsewhere, to your local department of health and the restaurant you may have gotten it from. This helps avoid dangerous outbreaks of food-borne illnesses.

Have you ever gotten food poisoning from Disneyland or Walt Disney World Resort?