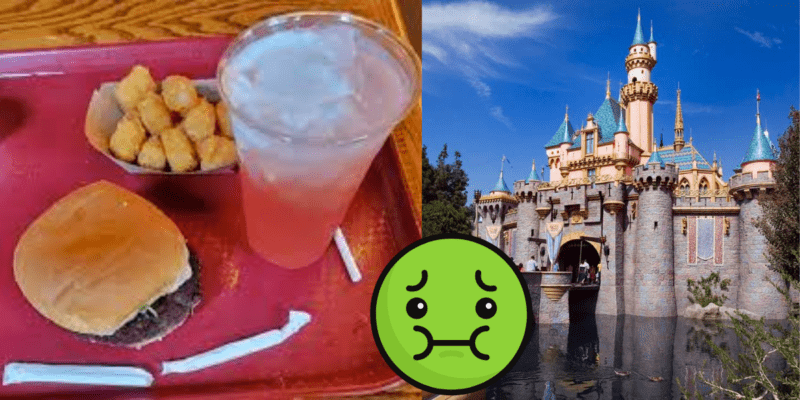 Disney Influencers and photographers can make Disney Parks’ food look picture-perfect – but sometimes it doesn’t come out quite right on our cameras!

u/silverdragon117 shared a photo of their meal at Red Rose Taverne in Fantasyland at Disneyland Park on Reddit. They got The Sunrise Burger with Taverne Potato Bites (tater tots) and a Coconut-Strawberry Lemonade:

It’s a normal-enough-looking meal, but dozens of commenters were disturbed that the Guest appeared to be eating the burger directly off the tray. “Are you raw doggin the food tray?” u/LevelHold5736 asked.

The Guest explained that they were given the burger in a foil wrapper, which they had put to the side. u/LevelHold5736 responded, “So you are raw doggin the food tray?” Other Disneyland Resort fans responded with disgust.

“You know they never wash those trays,” u/ZICRON_ULTRA said. “Enjoy the monkeypox.”

“Did you actively try to present this in the saddest, least appealing way possible? Putting the burger straight on the tray? Dropping trash around it? What are you trying to say here? 😂” u/YetiBot asked.

Despite its appearance, the Guest said the burger was good. It comes with bacon-orange marmalade, egg, and arugula on a toasted bun. u/greenwidow1234 agreed:

Had a burger here a couple weeks ago and it was delicious.

Trying to be positive, u/hippogriffinthesky said, “Well, the lemonade looks cold.” “So does the burger,” u/lanalovesme joked.

The Guest ended up deleting the photo but posted other food and beverage photos from his visit to Disneyland Park, Downtown Disney, and Disney California Adventure, like this one of a Rocket Soda from Refreshment Corner:

All jokes aside, it’s best not to eat directly off a tray at a Disney Park or anywhere. While they’re wiped down, they’re not nearly as sanitary as a plate or disposable wrapping.

What’s the best snack you’ve ever had at Disneyland Resort or Walt Disney World Resort?