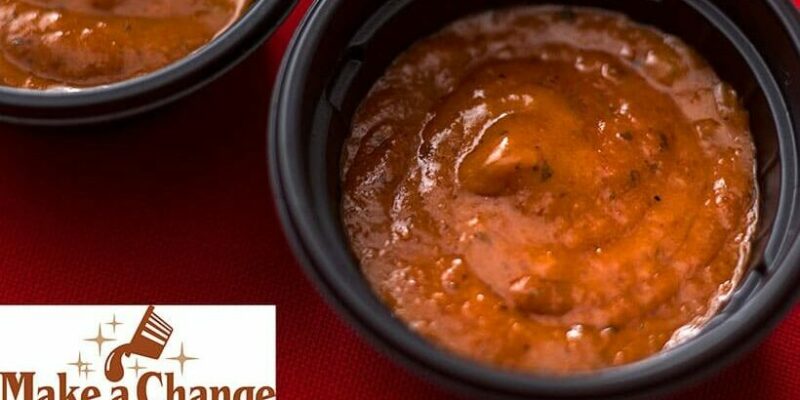 The Walt Disney Company is trying something new with its limited edition Spicy Harissa Sauce offering at Disney Parks — and fans want the delicious sauce bottled as a souvenir to take home.

Think wine and cheese pairings — but with hot sauce.

The Spicy Harissa Sauce is described as follows:

This “Spicy Harissa Sauce” is not only spicy, but also has a depth of flavor, with spices such as cumin, coriander, chili powder, and habanero added with vegetables such as paprika and tomatoes.

This Spicy Harissa Sauce has made its own wave within the Tokyo Disney Resort, with Disney Park fans requesting the theme park to release the sauce on its own for purchase.

Twitter user @maa623123456 is almost begging the Tokyo Disney Resort for the sauce to be sold in stores, adding a bowing emoji:

It was so delicious that I want to buy it home as a souvenir. Seriously, please. 🙇‍♀️

While @lotso_19950724 wants the limited edition sauce to continue into October:

I wish I could have this in October too~🔥🙏🌶️

As a result, the good folks over at the Tokyo Disney Resort have released their Recommended Combination Menu that goes well with the Spicy Harissa Sauce, and provided the locations where you can get your hands on the delicious treats that pair with it.

Apparently, the “creaminess of the cheese gratin and the mellowness of the fried egg yolk are entwined”, and the “harmony of mildness and spiciness transforms the burger into an exquisite dish” — sounds pretty good to me!

Next up is the classic Cheese Dog at Tokyo Disneyland’s Refreshment Corner.

They recommend adding the same amount of Spicy Harissa Sauce as the provided mustard and ketchup, creating something truly spicy yet tangy. A cold drink on the side is also recommended.

They recommend the Spicy Harissa Sauce to be used as a “spice adjuster” of sorts, starting off with a little atop the rich curry gravy, and mixing it little-by-little into the fluffy rice and curry roux to find your own personal balance.

Disney Park fans clearly can’t get enough of the stuff, willing to make stops during their days of attraction-hopping for this sauce. Hopefully the Tokyo Disney Resort will take fans’ advice, and we’ll soon see bottles of the popular sauce lining shelves inside the Parks.

What do you think about this new food craze? Would you buy a bottle of Spicy Harissa Sauce? Share your thoughts in the comments below!

When it arrives next year, Park Guests will enter Fantasy Springs through an enchanted waterfall grotto, that opens into a magic-filled Port where Guests can find themselves visiting Peter Pan’s Neverland, Rapunzel’s Tower and Kingdom of Corona, and Anna and Elsa’s Arendelle: World of Frozen — potentially even check-in at a luxury hotel connected directly to Fantasy Springs itself.

Comments Off on Move Over “Pink Sauce”, Disney’s “Spicy Harissa Sauce” Has Fans Begging For More