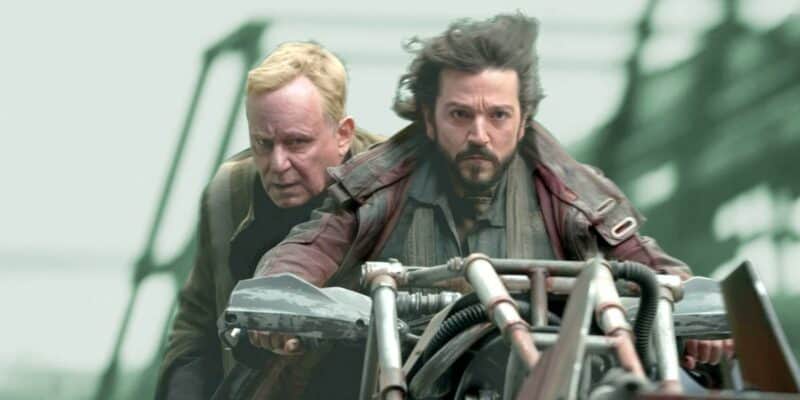 The force is not with him…

For fans of the recent Disney+ series, Star Wars: Andor (2022), Luthen Rael (Stellan Skarsgård) has been just one of the many enigmas presented over the past 11 episodes. As his story isn’t yet finished, but must be before Rogue One (2016), this has led to plenty of speculation on the parts of fans. Some have hypothesized he is actually working for the empire because of his willingness to trade lives. Others have speculated that he has some sort of tie to the Jedi Order, due to some of the artifacts in his shop, and still others think he may well be a Jedi.

These theories were furthered by the appearance of a mystery weapon that was taken from Luthen (Skarsgård) in the latest episode, Daughter of Ferrix. When approaching Saw Gerrera’s (Forest Whitaker) camp, he is stopped, and searched. The partisan guard finds what looks to be a small wooden handle, with finger grooves, and a metal end on each side. “Put it down, or give it back” says and impatient Luthen (Skarsgård). Could it be a lightsaber?

According to a recent piece of merchandise, the answer is a flat no. The merch in question is a Black Series action figure of the rebellion leader, and comes with the wooden handle in question. The thing that quashes the hopes that he may be a Jedi however, is an image on the side, which shows the handle is actually a clever concealment for a small knife. This would suit a man in his position a little better than a blaster, and would certainly be more subtle.

This does not dispel all mystery around the ringleader however, as there are still many questions about him, his background and his intentions, not to mention how he gets his hands on so many amazing artifacts, or how he has such an impressive spacecraft! The season finale of Andor will premier on Disney+ tomorrow, November 23, 2022, and stars Diego Luna as Cassian Andor, Stellan Skarsgård as Luthen Rael, Genevieve O’Reilly as Mon Mothma, and many more!

Could Luthen still be a Jedi? Let us know in the comments below!