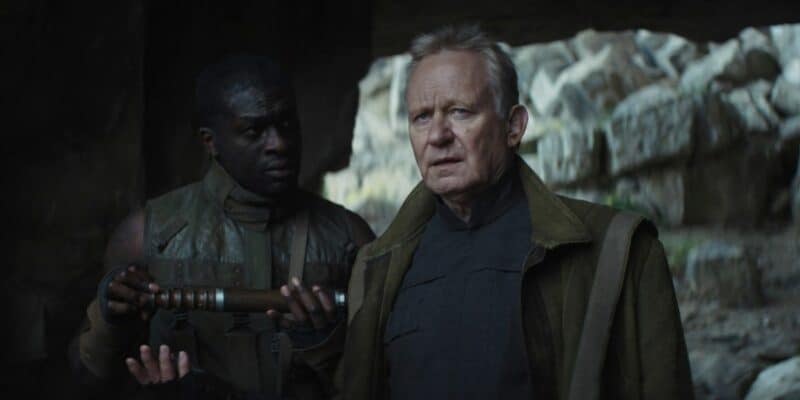 Somehow, we’ve arrived at the point of having just one episode of Andor left (before the second season, anyway). Episode 11, “Daughter of Ferrix”, saw the death of Maarva Andor (Fiona Shaw) send ripples through the galaxy as all our major players received the news and reacted accordingly. What does it mean for the season finale next week?

We look set to return to where the show began: the mining planet of Ferrix, which has remained near constant throughout the show as we’ve witnessed it descend into Imperial occupation and it’s residents become increasingly embattled and brutalised under the regime.

The symmetry in the story might apply to the setting, but the characters are certainly much different from where we first started — and none more so than our hero, Cassian Andor (Diego Luna). Cassian left Ferrix a man on the run; he will return as a leader of men and revolutionary, fresh from his escape of Narkina 5’s prison facility and armed with new reasoning and inspiration to fight the Galactic Empire.

Yes, he’s seen first hand the suffering of many others at the hands of the Emperor’s regime; but that same regime has also denied him the chance to be with his mother in her final moments, both prison and Maarva’s own insistence on fighting her own private revolution by staying put on Ferrix meaning they were apart when she passed at the start of this episode.

He was the last to find out about her death in the episode’s final moments, sharing a stoic front with co-escapee Melshi (Duncan Pow) but in reality, stricken with grief and no doubt a frustrated rage at not being there or being there sooner. It is a foolish, but understandable move he will no doubt make next: heading back to Ferrix for Maarva’s funeral, and right into the hands of ISB supervisor Dedra Meero (Denise Gough), who has set a trap and awaits him.

For Dedra, Cassian is a means to an end. He is the key which can unlock the identity of ‘Axis’ for her, the rebel agent she has placed at the center of events like the Aldhani Heist and other examples of theft and rebellion across the stars. Cassian is a solid link to that character, and Dedra will do whatever it takes to have him. In that objective, she sees validation and a way up the Imperial ladder.

As for Axis himself — we know him better as Luthen Rael (Stellan Skarsgård). Luthen, fresh from a meeting with Saw Gerrera (Forest Whitaker), is pondering whether or not to head to Ferrix himself before he is intercepted by an Imperial patrol.

After making his escape, who knows whether he will decide to deal with it himself or not? Certainly he made it clear that he is painfully aware of who does and does not have a direct link to himself, and Cassian is on that list.

As we know from earlier in the season, the Rebels are not against closing an open end permanently if it means protecting the greater cause. Stationed on Ferrix is Cinta (Varada Sethu), waiting for Andor herself alongside her unwitting Imperial counterpart, Corv (Noof Ousellam).

The only person not to likely show on Ferrix is Mon Mothma (Genevieve O’Reilly), who seems set to reach a turning point in her financial struggles and efforts to hide her rebel donations from Imperial auditors. Her fight, as always, takes place right in the vipers’ nest on the capital world.

And last, but certainly not one to count out, is Syril Karn (Kyle Soller). He has been festering at his mother’s Coruscant home for most of the season, but information shared with him via an old colleague this episode that Maarva has died will surely send him packing back to Ferrix. No doubt he sees this as a career opportunity but also a chance to redeem his name and prove himself against the withering barbs of his mother Eedy (Kathryn Hunter).

Our players are all in motion and set to converge back on Ferrix, the centre of Andor’s Star Wars galaxy — who will make it out alive?

What do you think will happen next episode? Tell us in the comments below.

Andor (2022) is currently streaming on Disney+. Led by showrunner Tony Gilroy, it stars Diego Luna as Cassian Andor, Genevieve O’Reilly as Mon Mothma, Stellan Skarsgård as Luthen Rael, Fiona Shaw as Maarva Andor, Denise Gough as Dedra Meero, Adria Arjona as Bix Calleen and Kyle Soller as Syril Karn. Set before the events of Rogue One: A Star Wars Story (2016), in the years prior to Princess Leia’s fateful capture by Darth Vader, before Obi Wan Kenobi’s fateful encounter on the Death Star, it follows the formation of the Rebel Alliance in the ever-expanding Star Wars universe.