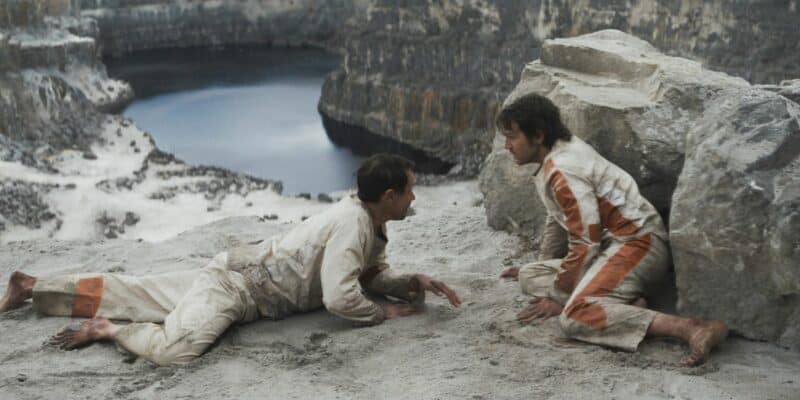 This week’s episode of Andor sets all our pieces in play for next week’s finale, bringing all the strands back together again. They’re united in the pursuit of our hero Cassian (Diego Luna) but it is actually his mother, Maarva (Fiona Shaw) who is the instigating factor — or rather, her death is. As news of Maarva’s demise spreads across the galaxy, each of our players responds and the stage seems set for a grand confrontation on Ferrix next week.

The episode opens with Cassian and Melshi (Duncan Pow) hanging from a cliff edge, hiding from an Imperial patrol on Narkina 5 after their escape from the prison facility last episode.

On Ferrix, we take the perspective of B2EMO, the Andors’ faithful droid, as he overhears discussion around what they should do with Maarva’s bedding and he is asked if he would like to say goodbye to her by Brasso (Joplin Sibtain), a family friend. He tells the droid that “the daughters of Ferrix need his assistance in matters of great importance”, and Jezzi (Pamela Nomvete) comes over to offer her condolences.

As Maarva’s wrapped body is removed from the home, Corv (Noof Ousellam) watches on, and attempts to probe Cinta (Varada Sethu) for more information.

Back on Narkina 5, Cassian and Melshi have successfully dodged the Imperials and identified a potential way off-world. There’s an old quadjumper parked near to two fishing Narkinians. The pair make a run for the ship but are ensnared by an automatic net trap, webbing them as the fishing natives laugh.

On Ferrix, Corv has relayed the news of Maarva’s death back to Dedra Meero (Denise Gough), saying the locals are asking for a permit to close Rix Road for her ceremony. Local tradition dictates two days in which Maarva’s body will be transformed into a brick, to be placed ceremonially within the community. Dedra says they should approve their request, but keep it a small ceremony. The bait is set to bring Cassian back within their clutches.

On Narkina 5, the Narkinians debate claiming the 1000 credit bounty for the prison escapees, lamenting the way the Imperial facility has ruined their water and food sources. They seem open to claiming it whether they are alive or dead — but then set the pair loose, and ask where they need to be. They’re no friend of the Empire either, after seeing what their presence has done to their home.

At Luthen’s (Stellan Skarsgard) shop, Kleya (Elizabeth Dulau) is visited by Vel (Faye Marsay). Kleya is trying to keep up the ruse of being a shopkeeper; Vel has no time for it, insisting she needs to speak to Luthen as soon as possible and noting that his Fondor ship is absent from behind the store. She wants to pass on that Cassian’s mother has died.

On Ferrix, Corv notes that Brasso is back at the Andor residence. Inside, he is trying to convince B2EMO to leave, but the droid is in denial about Maarva’s death and refuses to leave. He relents and agrees to stay another night.

In the Imperial hotel base, Bix (Adria Arjona) looks traumatised by her interrogation at the hands of the Empire. She is summoned to another conversation with the officers, who drill her on whether Anto Kreegyr is the man she connected Cassian with.

At Mon Mothma’s (Genevieve O’Reilly) we see daughter Leida (Bronte Carmichael) taking part in a group ceremony with other girls her age. Vel is there, and asks Mon if this was her idea, or her husband’s — but it turns out it was Leida’s herself, who has apparently found some appeal in Chandrilian custom.

It seems linked to the arranged marriages which were discussed in an earlier episode, as Vel says “Don’t tell me you’re taking proposals?”

Mon confesses her entire situation to her cousin, telling her all about her financial situation and how she is 400,000 credits away from being able to safely pass an Imperial audit. As she says she has found a solution, Leida interrupts, greeting her Auntie Vel with warmth and casting contempt at her mother.

From one parental relationship to another: at Syril’s (Kyle Soller), his mother awakens him for a phone call. It is an old colleague in the Pre-Mar Corp, calling via a terrible com signal to tell him of Maarva’s death. The news re-sparks his ambition.

Back with Cassian, he appears to have made it back to Niamos, stealing into his old apartment to retrieve his lockbox of credits and blaster.

We find Luthen visiting with Saw Gerrera (Forest Whitaker). Saw has agreed to help with air support on Anto Kreegyr’s Spellhaus raid, in return for Luthen’s promised gear and free reign over his own command. Luthen has to tell him that the ISB already knows of the plan and that essentially, he is sending Anto and his 30 men to die.

Saw determines that Luthen is either ISB himself, or has an agent on the inside he wants to protect, questioning if he would make the same sacrifice if Saw was in Anto’s position. Luthen says Anto has never knowingly met him and doesn’t represent a personal threat. In a paranoid frenzy, Saw demands to know if Luthen has a spy within his ranks too: Luthen bluffs by identifying Two Tubes (Aidan Ward) and then pulls a blaster on him.

He says he didn’t want to put Saw in the position of having to make this decision, but it had to be done. Saw says it is for the greater good, implying they will be sending Anto and his unit to their deaths. “Let’s call it war,” Saw decides.

Luthen and Kleya are having a coded conversation as he pilots the Fondor. She has told him about Maarva’s death and he is pondering whether to intervene on Ferrix directly, a move Kleya is firmly against.

Their conversation is cut short when the Fondor is identified by an Imperial patrol, active in the sector as they are aware of partisan activity. They lock the Fondor into a tractor beam as Luthen plays for time, first until he can acquire a false Alderaanian ship ID and then while he loads countermeasures against the trap.

The Imperials almost let him go when his ID clears, but decide to board regardless as free practice. That’s when Luthen deploys his hidden weaponry: ballistics launch out of the rear of the ship, destroying the tractor beam, as thrusters boost him away from the Imperial patrol. Aghast at the surprise, the patrol deploys TIE Fighters to take him down.

Some aerial acrobatics and hidden lasers later, Luthen manages to evade them and leaves them stunned.

On Niamos, Cassian has called Ferrix shopkeep Xamran (Zubin Varla) to pass along a message to his mother. Xam has to tell him she is dead. A stunned Cassian returns to Melshi’s side, who asks if everything is okay.

He says it is. Melshi, stunned at the vast open waters of the resort world, says he and Cassian need to split up to double their chances. They have no idea how many actually escaped Narkina 5, but he is determined that the galaxy needs to know what they went through.

“People have to know about this,” Melshi states, as he heads off and leaves Cassian deep in thought next to the water.

What did you think to Episode 11? Tell us in the comments below.