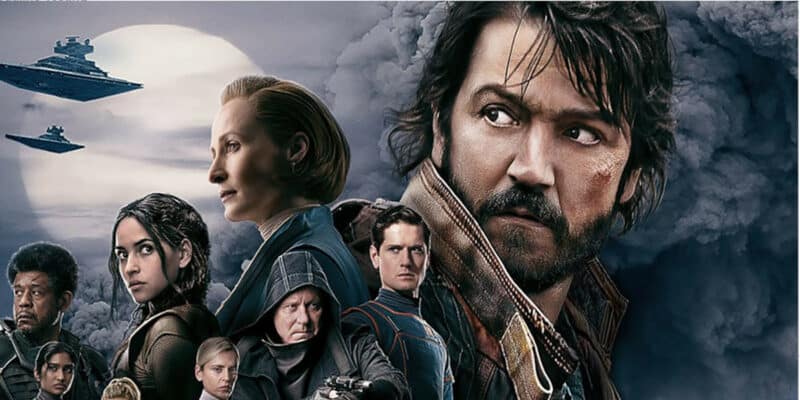 So many Easter Eggs in Andor, we may need a basket for this episode!

Andor seems to be a playground for Star Wars set design, prop masters and production, even more so than Rogue One (2016). Each episode has given fans a new little callback or nod to other entries into the universe, and Episode 11 was no exception! We’ve gathered the seven that we noticed, take a look below!

Yet another first live action appearance in Andor, the Tie Reaper was seen flying overhead in one of the very first scenes, as Cassian Andor (Diego Luna), together with another inmate, Melshi (Duncan Pow), climb a sheer cliff face to freedom. While the reaper has been seen in other Star Wars content, it was very exciting to see this new Tie used in a live action series.

Fans of the sequel trilogy will recognize the quadjumper as Rey (Daisy Ridley) and Finn’s (John Boyega) first choice in their escape from the First Order, shortly before being destroyed by First Order Tie Fighters. Andor adds a little further depth, when Cassian (Luna) mentions that it’s an older model, which means post Return of the Jedi, that quadjumper on Jakku must have been an antique!

Making their debut in The Clone Wars, the guards of the Jedi Temple are a solemn, and mysterious group, with very little of their number known by name or by face, the Grand Inquisitor (Rupert Friend) being a notable exception. Seeing yet another artifact like this in Luthen Rael’s (Stellan Skarsgård)  shop sparks a few questions, namely, how he got his hands on one! Is he closer to the empire than we’ve been led to believe? or closer to the Jedi?

This next one goes way back to Star Wars: Episode I – The Phantom Menace (1999). While Gungans have have a small role in other films and Star Wars content, it’s been a long time since we’ve seen any of their weapons or defense in live action. A deactivated Gungan shield is another one of the artifacts on display in the shop, and yet another fantastic callback.

Eagle-eyed viewers will catch right next to the Gungan Shield a tall, wooden, Wookie Battle Shield, as seen in Star Wars: Episode III – Revenge of the Sith (2005), on Kashyyyk. It seems like designers and set dressers are utilizing every piece they have over at Lucasfilm, and we aren’t mad about it at all!

The mysterious Benthic (Aidan Cook), one of Saw Gerrera‘s (Forest Whitaker) most trusted partisans, returned in Andor, and has been no less stern, and menacing to those that may threaten Saw (Whitaker) or the cause. This time, however, Benthic appeared with a very familiar weapon: The Tusken Cycler. A projectile based weapon, it does seem a little antiquated for his purposes, but, maybe an upcoming raid on an armory will supply him with something more suited.

One of the largest easter eggs was also one of the deepest cuts! The Cantwell Class Arrestor Cruiser made it’s live action debut in Episode 11, and was based on a concept for the very first Star Wars: Episode IV – A New Hope back in 1977. An in depth look is also available, here!

Ah that classic weapon of mercenaries and rebels alike, the Bryar pistol actually made it’s live action debut earlier in the series, but is still worth noting, as it’s a great tribute to the video game character that Cassian (Luna) was inspired by, Kyle Katarn, and a great nod to fans of those early Jedi Knight games.

Were there other easter eggs you saw? Let us know in the comments below!