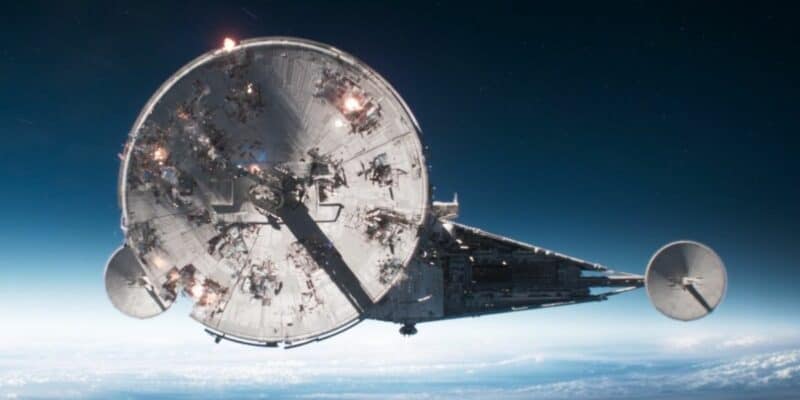 You’d be forgiven for being so caught up in the tense space battle at the end of Episode 11 of Andor that you missed this loving tribute to a Star Wars legend.

The design of the Imperial ship, an Arrestor cruiser, actually hails back to 1976 and Star Wars: Episode IV – A New Hope (1977) spaceship designer Colin Cantwell.

Back then, Colin’s design was known as a Sith carrier — the name the Galactic Empire was going by in the version of the script Colin was working from — and eventually in future design revisions would become the Star Destroyer, most famously seen during that movie’s opening moments.

That ship, with it’s distinctive three tractor beams, hasn’t truly appeared in Star Wars until this episode of Andor (apart from one small reference in Solo: A Star Wars Story (2018), and a Hot Wheels toy).

But it certainly made an impression, being part of one of the show’s most memorable moments as Luthen Rael (Stellan Skarsgård) evades capture in his ship the Fondor by deploying some impressive countermeasures against the formidable Imperial vessel.

The ship’s captain looks on agog as his central tractor beam array is destroyed by a barrage of explosives, and the subsequent TIE Fighters (another ship Colin designed) are wiped out by Luthen’s hidden lasers.

Colin even got a name drop, being immortalised in Star Wars canon when the Fondor’s onboard computer identifies the enemy craft as ‘Arrestor cruiser, Cantwell-class”.

Colin sadly died in May 2022, but his legacy will forever live on in some of cinema’s most iconic spaceship designs: he was also responsible for creating art for the X-Wing, Death Star, and even the first Millennium Falcon.

Now that the Arrestor cruiser has made a stunning debut, there’s another ship to add to his impressive roster.

Fun fact, courtesy of StarWars.com: Colin might have been the first person hired by creator George Lucas to work on Star Wars, days ahead of concept artist Ralph McQuarrie.

Star Wars streamer Kyle Katarn was among those who noticed the loving tribute to Colin’s work.

Do you get super excited at the sight of Colin Cantwell’s original destroyer design or are you normal?

Do you get super excited at the sight of Colin Cantwell's original destroyer design or are you normal? pic.twitter.com/HsmVW4HZTn

The tribute to Colin wasn’t the only Easter Egg hidden in the episode — read about all the others we found here.

Did you notice the tribute to Colin Cantwell in Andor? Tell us in the comments below.