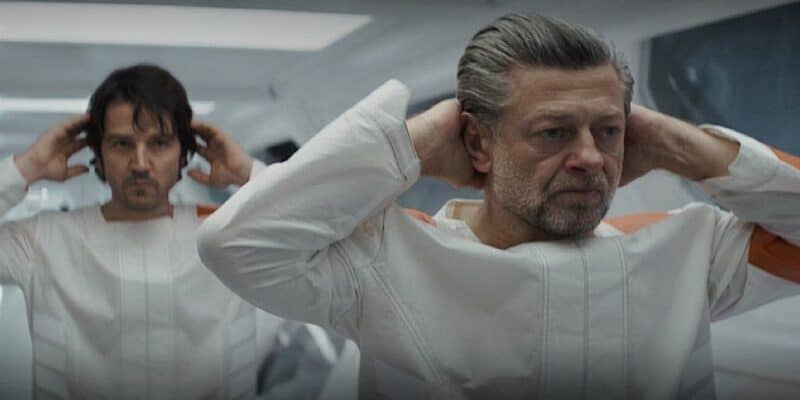 Andy Serkis finally discusses his new role in Diego Luna’s Andor and confirms some essential details about his character.

Tony Gilroy promised fans that he wouldn’t do fanservice, but that didn’t stop him from bringing in some notable Star Wars characters and actors. Fans already saw Forest Whitaker make a cameo as Saw Gerrera due to Luthen Rael trying to sell some hardware to him.

Now, fans see Andy Serkis as a new character called Kino Loy in prison on Narkina Five with Cassian Andor and Melshi, one of the Rebel pathfinders in Rogue One (2016). Serkis is well-known more for his CGI work as Supreme Leader Snoke in the Sequel Trilogy. The actor has also played Gollum in the Lord of the Rings trilogy and Caesar in the Planet of the Apes trilogy.

Fans were shocked to see Serkis back in Star Wars since his last character was chopped in half by Adam Driver’s Kylo Ren, but now the actor is showing his face and isn’t the first Star Wars actor to play another role in the universe. This led to some fans wondering if Snoke’s background might be changed and that Serkis played the same character before he became disfigured and no longer human.

Fans desperately wanted this to become true despite Star Wars: Episode IX — The Rise of Skywalker (2019) making it clear that Snoke was a proxy for Palpatine until the Sith Lord returned. With all of the recent retcons to Star Wars canon by Dave Filoni, it makes sense that fans could ignore this fact, but Andy Serkis decided it was time to clarify if Kino Loy was indeed Snoke.

During an interview, Serkis shared that the two characters aren’t related and completely different and Star Wars Holocron shared the quote online:

Andy Serkis on theories that his character in #Andor is Snoke “[Kino] is definitely not related in any way, shape, or form to Snoke. Let’s just get that clear.”

Andy Serkis on theories that his character in #Andor is Snoke

“[Kino] is definitely not related in any way, shape, or form to Snoke. Let’s just get that clear.”

Andor finally proved in Episode 9 – “Nobody’s Listening!” that the prison Kino Loy and Cassian are in doesn’t let any prisoner leave, which has set up that Kino and Cassian will be working together to ensure that they can escape with the fantastic line confirming “no more than twelve” guards on every level.

The next episode will include a massive moment for the series, and it could also be the last time fans see Serkis as Kino Loy if he doesn’t make it. After the next episode, there’s a good chance that Serkis has spent more time as Kino Loy than Supreme Leader Snoke. With Snoke’s return questionable for future spinoffs, it’s great to see Serkis involved with Star Wars again.

Do you think we will see more of Kino Loy in Star Wars? Let us know what you think!