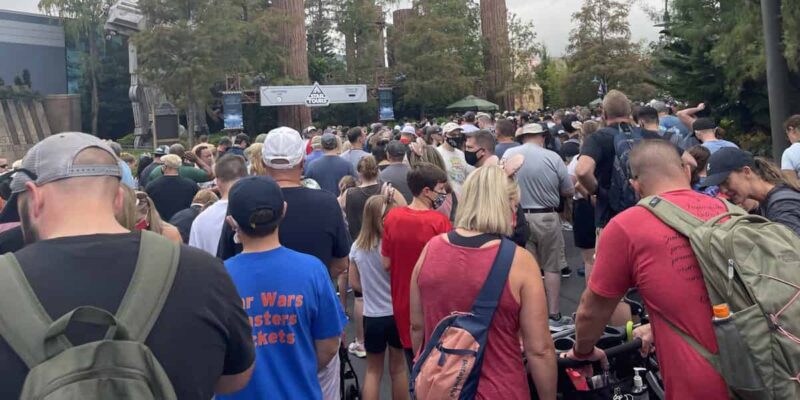 A rare moment caught on camera…

There are a series of similar items on many Disney Guests’ agendas. From grabbing a reservation for hard-to-get eateries to winning the virtual queue lottery for select attractions, watching fireworks over Cinderella Castle to even managing to buy sought-after merchandise (hello, Figment Popcorn Bucket!), places like Walt Disney World Resort are a hive of frenzied activity.

And one of those experiences that tends to be high up on the majority of Guests’ to-do lists, fans of the galaxy far, far away or not, is Star Wars: Rise of the Resistance at Disney’s Hollywood Studios.

The attraction is found at the Black Spire Outpost on the planet of Batuu — commonly known as Star Wars: Galaxy’s Edge — and joins Millennium Falcon: Smuggler’s Run as the only two attractions in the Disney World land, as well as the version at Disneyland Resort. That doesn’t make it any less special, though. In fact, quite the opposite. With outstanding theming from the Walt Disney Imagineering team and a host of interactive experiences, such as building lightsabers at Savi’s Workshop, and locations like Oga’s Cantina, Galaxy’s Edge is one of the busiest lands at the Central Florida Disney Resort.

So much so, that the popular Star Wars: Rise of the Resistance attraction consistently has long-wait times and often sold-out Lightning Lanes. Being one of Disney World’s handful of a la carte Lightning Lane Selections, Guests can only ride the attraction via the standby line or by purchasing a Lightning Lane via the My Disney Experience app — Smuggler’s Run is bookable through the general Disney Genie+ paid option.

And while Rise of the Resistance is generally crowded, one Guest recently had an unprecedented experience on Thanksgiving night when she found the attraction completely dead.

Sharing to TikTok, SouthernDisneyBelle, captured her time while boarding the famous ride:

Have you ever seen Rise of the Resistance this empty? Thanksgiving night at Walt Disney World was unprecedentedly empty. #starwars #riseoftheresistance #disneyworld #fyp #lightsaber

Have you ever seen Rise of the Resistance this empty? Thanksgiving night at Walt Disney World was unprecedentedly empty. #starwars #riseoftheresistance #disneyworld #fyp #lightsaber

♬ Duel of the Fates (From “Star Wars: Episode I – The Phantom Menace”) – Robert Ziegler

The Guest can be seen walking down a deserted corridor of the attraction, something hardly ever seen at the Disney Resort for any ride let alone one like Rise of the Resistance. The caption also adds more mystery. This Disney Guest visited on Thanksgiving, a busy holiday for the Parks in the United States, and one that was actually sold out in terms of Park Passes for both Disney’s Hollywood Studios and Magic Kingdom Park. With the Park fully booked for the day in terms of the theme park reservation system, it really is an unprecedented turn of events to have this iconic attraction all to oneself.

Walt Disney World Resort was set to be heavily crowded during the week of Thanksgiving with a pre-pandemic level of traffic moving through Orlando International Airport this holiday season.

Did you spend Thanksgiving at a Disney Park? Let us know in the comments down below!