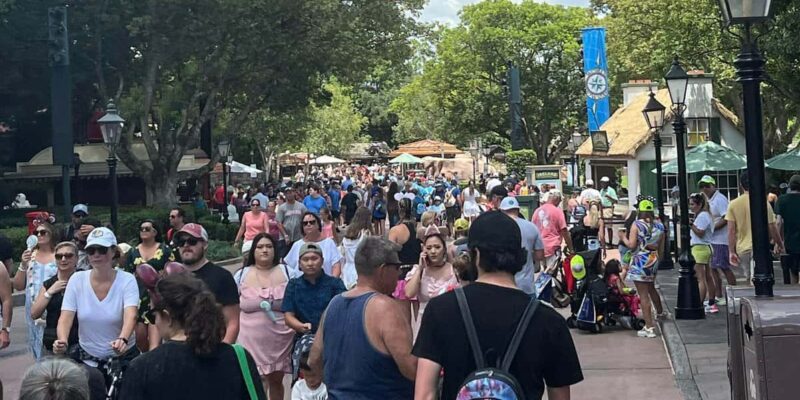 This holiday season is once again going to see massive crowds take over the Walt Disney World Resort as visitors moving through Orlando reach pre-pandemic levels.

That was of course made trickier when the Disney World theme parks reopened following the pandemic shutdown. In addition to a Disney Park ticket, Guests must also acquire a theme park reservation in the form of a Disney Park Pass, and despite COVID-19 protocols reducing to relatively nothing across Disney’s theme parks in the United States, Park Passes and the dreaded Park Hopper rule have remained.

The reservation system has proven a contentious part of the vacationing experience, especially for Annual Pass and Magic Key holders at Disney World and Disneyland Resort, respectively. Those Disney Guests have launched protests and lawsuits on both coasts in response to the lack of Park Pass availability for Passholders in line with the terms of purchase. But, still throughout the past few months, The Walt Disney Company has stayed firm on its stance to utilize the system to give Guests a more pleasant and valuable experience — at least that is what former CEO Bob Chapek has consistently claimed, whether the new and returning Bob Iger will make any changes, is still up for debate.

Between the Park Pass system, Disney Genie+, and the polarizing Lightning Lane, many have complained about the state of the Disney Parks but that doesn’t stop many from flocking to the Resort. It was recently reported that Magic Kingdom Park was fully booked for Thanksgiving, with Disney’s Hollywood Studios unavailable also on days in the run-up to the holiday. Now, the popular Park, home to Cinderella Castle and Disney Enchantment, is booked up for five days across the 12-day Thanksgiving period.

This could correlate with the pre-pandemic levels of visitors moving through Orlando International Airport this November. Click Orlando reported:

ORLANDO, Fla. – Travel over the first four days of the Thanksgiving holiday travel period at the Orlando International Airport is already “exceeding expectations,” according to airport officials.

Last week, airport CEO Kevin Thibault predicted there will be 1.75 million passengers at the airport during the 12-day travel period, which runs between Nov. 18 and Nov. 29.

The report goes on to discuss the increase in visitor traffic versus last year, and pre-pandemic in 2019:

The busiest day at Orlando International Airport is projected to be the Saturday after Thanksgiving with approximately 165,100 passengers, according to Thibault.

Related: Guest Spends Over $600 at Disney World In One Day, Claims “Never Going Back” After Huge Problems Arise

While this doesn’t mean Guests cannot visit the sold-out Parks on these days, they can utilize the 2 p.m. Park Hopping rule, it does mean that the Parks will be busy, with big crowds, and potentially long wait times. Usually, with popular rides like Space Mountain at Magic Kingdom and Star Wars: Rise of the Resistance at Hollywood Studios, Genie+ and Individual Lightning Lanes get booked fast meaning those entering the Park post-2 p.m. might find their attraction reservations later in the evening.

It looks to be a busy few days at the Walt Disney World Resort.

Are you booked to go to a Disney Park this Thanksgiving? Let us know in the comments down below!