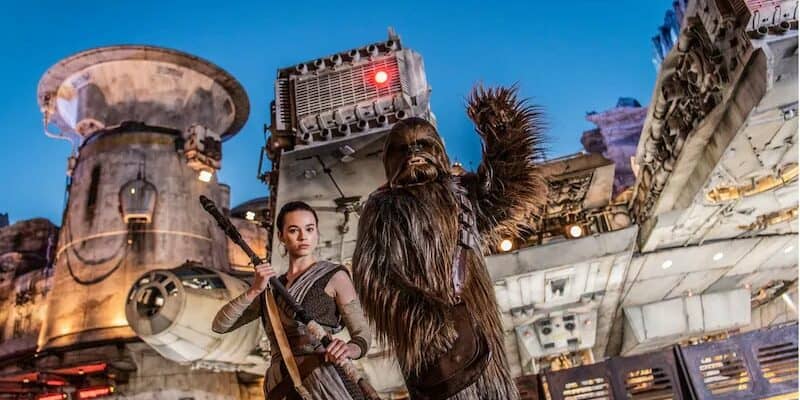 While the Disneyland Resort in Anaheim, California, features dozens of classic rides and attractions, one of the more recent additions has left fans waiting for hours on end. Star Wars: Galaxy’s Edge is a truly breathtaking land that places Guests directly in their very own Star Wars adventure.

Star Wars: Galaxy’s Edge is Disney’s most ambitious land yet, a place that mixes highly immersive experiences with the ever-expanding Star Wars universe. Guests can visit Star Wars: Galaxy’s Edge in Disneyland Park at Disneyland Resort and in Disney’s Hollywood Studios at Walt Disney World Resort, where they can live their own Star Wars story, fly the Millenium Falcon and explore the wonders of Black Spire Outpost in the planet Batuu, where adventure awaits.

Black Spire Outpost is also home to a couple of mouthwatering dining locations like Docking Bay 7 Food and Cargo, Ronto Roasters, Milk Stand, and the breathtaking Oga’s Cantina. A reservation is required to enter Oga’s Cantina. You can click here to learn more about this location and make your reservation.

However, a new experience is headed to Disney’s west-coast Guests, one that can be found on the fictional planet of Batuu.

Back in Orlando, Florida, Disney introduced a new interactive game with Batuu Bounty Hunters, which uses Disney’s new MagicBand+ to involve Guests in a game where they hunt for different characters hidden within the land.

The game is completely digital besides your MagicBand+, which indicates if you are hot or cold via a series of vibrations and color indicators on the band. This game has been popular among Guests with a MagicBand+ and is slowly making its way to Disneyland’s version of Galaxy’s Edge.

You can see the progress made with Disneyland’s version of the game down below thanks to a tweet from Wonders of Magic (@wondersofmagic):

The walls are now down in Batuu West and we got a first look at the new check-in station for the Batuu Bounty Hunters game and other interactive stations around Galaxy’s Edge!

The walls are now down in Batuu West and we got a first look at the new check-in station for the Batuu Bounty Hunters game and other interactive stations around Galaxy’s Edge! 💫 pic.twitter.com/6JD1CxMG6e

There is not an official date for when we can jump into this game at Disneyland but is expected to be available in Fall 2022, so keep an eye out if you’re visiting anytime soon.

Will you be visiting Disneyland anytime soon?