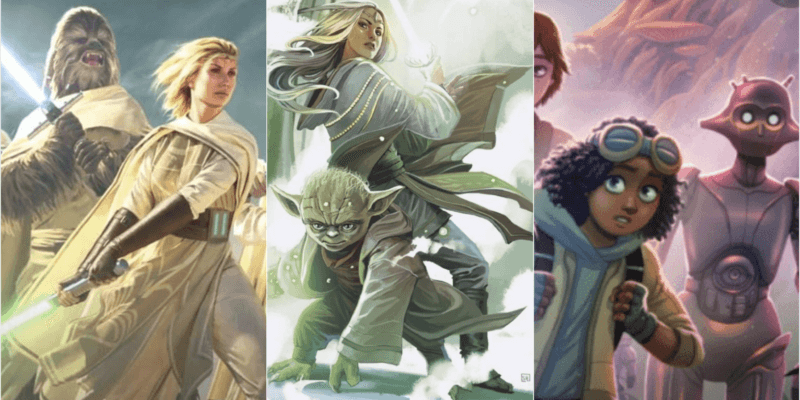 Hundreds of years before Luke Skywalker or Darth Vader, there was the High Republic…

What Is The High Republic Era?

Star Wars has traditionally centered around the Skywalker Saga, hooked in the stories surrounding Jedi Knight Anakin Skywalker, his path to the dark side, and his eventual redemption with the help of his children, Luke and Leia. But long before the Rebel Alliance battled the Galactic Empire, before the Clone Wars, before a Phantom Menace was unveiled, stories of adventure existed. Tales of the Jedi Order bedecked in luminous golden robes; of the Republic at its greatest; and of the darkness, growing in the galaxy’s darkest edges, they must rise to fight against.

This is the High Republic.

Conceived as Project Luminous, Phase One represents a creative collaboration between celebrated authors Cavan Scott, Charles Soule, Claudia Gray, Justina Ireland, and Daniel José Older, as they explore and build out the world of the High Republic across books, comics, and even audio drama.

Related: ‘Star Wars’ Is About to Completely Change How We See the Prequel Trilogy

When Is The High Republic Era?

The High Republic starts as far back as current canon Star Wars storytelling has ever gone, hundreds of years Before the Battle of Yavin (BBY) and running up until approximately 82 BBY. Phase One takes place approximately 200 BBY; Phase Two, which has just begun, goes back even further.

What are the Notable Characters in The High Republic Era?

A new era means a whole new cast of heroes (and villains). On the side of the light, the Jedi Order is packed with memorable Padawans, Knights, and Masters. At the forefront is a trio of friends: Avar Kriss, who experiences the Force as a melodic song, with rhythms and tempo; Elzar Mann, a maverick who explores the Force in all its possibilities; and Stellan Gios, a paragon of everything the Jedi Order should be. Accompanying them on their adventures are a host of memorable fellow Force wielders, from Padawan Bell Zettifar and his fearsome Master Loden Greatstorm, Jedi Knight Keeve Trennis, Trandoshan Master Sskeer, Padawan Reath Silas and one of the youngest Jedi Knights ever, Vernestra Rwoh.

At the head of the Republic’s governance is Chancellor Lina Soh, flanked by her pet Targons. There are some recognizable names too: the San Tekkas, ancestors of Lor San Tekka (as discussed by Charles Soule with Polygon), are one of the galaxy’s most successful hyperspace prospecting families, a dynasty that helped carve paths out into the wider universe.

On the side of darkness: the mysterious Marchion Ro, Eye of the Storm and leader of the Nihil — a collective of space pirates and rogues who use a unique way of navigating Hyperspace to turn disaster to their advantage. And there’s a growing threat from the sinister Drengir, a long-dormant form of sentient plant life which represent a significant threat to life across the galaxy as a whole.

Will the High Republic be in Live Action?

Yes — but not for a while. The Acolyte, announced at the 2020 Disney Investors Day, promises to “take viewers into a galaxy of shadowy secrets and emerging dark-side powers in the final days of the High Republic era.” The cast is set to include Amandla Stenberg, Jodie Turner Smith, Lee Jung-jae, and Manny Jacinto.

Your way into discovering the High Republic is a library full of literature. Released in three waves across Phase One, the stories tend to center around one large-scale event per wave, with the rest providing supplementary, relatively standalone adventures that develop the characters and wider story further. They’re told across a series of adult, young adult, junior, and young reader tales, with short stories appearing in issues of Star Wars Insider too.

What books are in Phase One?

“Light of the Jedi” introduces you to the Star Wars galaxy in this period, as you see the Jedi Order respond to an unprecedented disaster. When the starship, Legacy Run, explodes in Hyperspace, the debris emerging threatens an entire star system. The Jedi Order marshals to help out, working alongside the Republic to save as many lives as possible. But little do they know that the terrible event has an architect: The Nihil has engineered the chaos as their first devastating strike against an unsuspecting galaxy.

The first young reader book of the High Republic, it shows the efforts on the ground as Jedi — including Wookiee Burryaga — do their best to save the world of Hetzal Prime during the Great Disaster.

Padawan Reath Silas is a city boy, happy amongst Coruscant’s towering skyscrapers. His world is about to change when he is dispatched to the Galactic Frontier, and even more so when the Legacy Run disaster causes his journey to go off course. They find refuge in an abandoned space station, but more than decaying equipment lurks in the shadows. This is the introduction of the Drengir, a long silent threat no one could have anticipated.

16-year-old Vernestra Rwoh is newly knighted, and her first assignment is taking a Padawan to the unveiling of a new space station, Starlight Beacon, along with Chancellor Lina Soh’s son. When a saboteur detonates explosives on the ship, they are forced to land on a strange planet and discover far more than just hostile wildlife.

Chancellor Soh has a vision for a number of Great Works, symbols of the blossoming Republic as they expand beyond the Galactic Frontier. One of them is Starlight Beacon; another is bringing systems together at the first inaugural Republic Fair. It should be a marker of unity and celebration; for the Nihil, it is a target for their rage. The Jedi and Republic find themselves once again attempting to salvage what they can in the midst of disaster.

On the ground at the Republic Fair, we once again join Burryaga as he battles the Nihil among the chaos of the attack.

Jedi Padawan Ram Jomaram is tinkering in his workshop when chaos unfolds on Valo. He spots an alert on nearby Crashpoint Tower and heads off to investigate with his trusty droid V-18, uncovering far more than he could have bargained for and an extra layer of danger to the Nihil’s already devastating plot.

Hyperspace is a commodity. No one learns that quicker than salvager Sylvestri Yarrow, who finds herself drawn into a bitter rivalry between two of the galaxy’s most influential families, the San Tekkas and Grafs, both of whom made their money in the Hyperspace rush.

The first and only audio drama of Phase One, “Tempest Runner” brings to life the story of fearsome Nihil Lourna Dee. From her youth as Twi’lek royalty to how she finds herself an adversary of the galaxy at large, it uses music scoring and a full voice cast to bring the world of the High Republic to life — and treat listeners to cameos from some recognizable Jedi, such as Avar Kriss and Master Sskeer, too.

Jedi Knight Vernestra Rwoh and her new Padawan Imri Cantaros once again enter the fray, pitted face to face against the Nihil in a battle for survival.

The finest of Chancellor Soh’s Great Works, Starlight Beacon is a torch of hope and possibility for the frontier and Republic as a whole. It makes it the grand crescendo to Nihil leader Marchion Ro’s mission of destruction. Unfolding like a disaster movie, “The Fallen Star” brings together characters from across the High Republic’s many strands into a desperate fight to stay alive during an attack that will change the fate of the galaxy forever.

Jedi Reath Silas and Cohmac Vitus are dispatched to Corellia to investigate potential danger to the planet’s leadership. They soon find themselves in a tangled web of lies and deceit, working with a group — including a pop star — to try and save the day.

The events of the Starlight Beacon attack play out from the perspective of a group of young Jedi, once again following Burryaga as he faces the Nihil threat firsthand.

What Comics are in Phase One?

“The High Republic” comic series charts the wider story through three arcs, taking you through Padawan Keeve Trennis’ adventures facing the Nihil and Drengir on the front lines.

Aimed at younger readers, “The High Republic Adventures” follows younger Jedi and heroes as they make their way through a changing galaxy. It also features an appearance from Jedi Master Yoda, younger but no less wise.

“Star Wars: The High Republic — The Edge of Balance: Vol 1”

Jedi Lily Tora-Asi is assigned to help displaced civilians relocate in the wake of the Great Hyperspace Disaster to the planet of Banchii, but must face dangers bigger than relocation in this first Manga novel.

Jedi investigator Emerick Caphtor and Coruscant P.I. Sian Holt are on the trail of a mysterious weapon, in this noir-tinged story set in the galaxy’s murkiest depths.

“Star Wars: The High Republic — The Edge of Balance: Vol 2”

Lily’s story continues as she tries to protect Banchii from growing galactic threats.

“Star Wars: The High Republic — Eye of the Storm”

Discover the history of Nihil leader Marchion Ro in this capstone to Phase One of The High Republic.

In what order should I read Phase One?

With so much content to enjoy, you would be forgiven for being overwhelmed. Luckily, there is a handy reading guide to how you can enjoy The High Republic in optimal chronological order:

“Star Wars: The High Republic — Light of the Jedi”

“Star Wars: The High Republic — Into the Dark”

“Star Wars: The High Republic — A Test of Courage”

“Star Wars: The High Republic — The Edge of Balance: Vol 1”

“Star Wars: The High Republic — Showdown at the Fair”

“Star Wars: The High Republic — Out of the Shadows”

“Star Wars: The High Republic — The Battle for Starlight”

“Star Wars: The High Republic — The Edge of Balance: Vol 2”

“Star Wars: The High Republic — Eye of the Storm”

There you have it. This complete guide to all of the projects in the High Republic Era should set you up for when the Golden Age of the Jedi finally makes it to the screen.

Are you following along with the High Republic? Let us know in the comments down below!