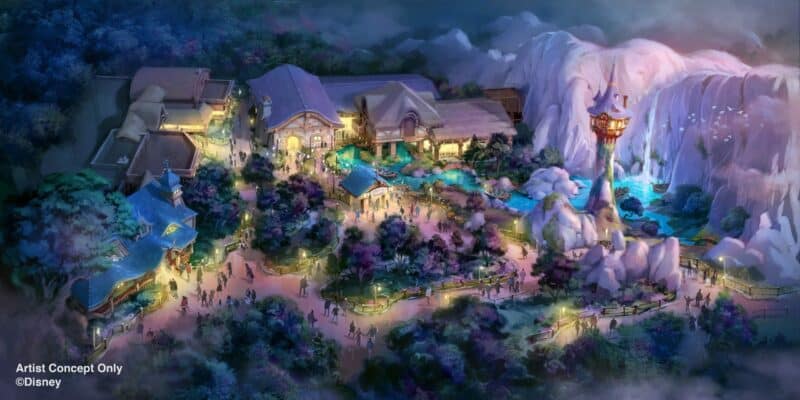 The new expansion project at Tokyo Disney Resort has been updated with names for the upcoming lands coming to the Tokyo DisneySea theme park.

Tokyo Disney Resort, the Disney-licensed, Oriental Land Company-operated Disney theme parks in Urayasu, Chiba, Japan, is a collection of two Disney Parks — Tokyo Disneyland and Tokyo DisneySea — as well as the shopping and dining area, Ikspiari. Soon, Tokyo Disneyland, a near mimic of Parks like Disneyland Park in California and France, and the Magic Kingdom in Florida’s Walt Disney World Resort (at least on a smaller scale), will celebrate its 40th anniversary — and much like the aforementioned Parks, will have special events, experiences, and activities for forthcoming Guests.

One of those large-scale openings, and perhaps an opening even bigger than Avengers Campus at Disneyland Resort’s Disney California Adventure Park, and Paris’s Walt Disney Studios Park, will be the addition of three themed areas in a new land at Tokyo DisneySea — Fantasy Springs.

Fantasy Springs was announced years ago and was slated for a 2023 grand opening, likely due to coincide with the Resort’s 40th celebration. However, a recent press release from The Oriental Land Company has revealed that the anticipated land will now open in the first fiscal quarter of 2024. The operators cite delayed overseas production and the ongoing ripple effect of the COVID-19 shutdown. The project will also now cost a reported 320 million Japanese yen (approx. $2.1 billion), up from the 2018 and 2020 projected numbers of 250 million Japanese yen (approx. $1.7 billion).

Now, with construction well underway, and Disney and OLC already revealing that Fantasy Springs will be centered around areas themed to Peter Pan (1953), Tangled (2010), and Frozen (2013), the names of these areas have finally been released. In a press release from the OLC, the company stated that Peter Pan’s Never Land, Rapunzel’s Forest, and Frozen Kingdom will be the names of the upcoming Fantasy Springs areas, and be based around their Disney film namesake.

The release said of Frozen Kingdom:

Set after the events of the Disney Animation film Frozen, Frozen Kingdom is full of happiness now that Queen Elsa has embraced her powers to create ice and snow. The Kingdom of Arendelle has been returned to its former glory and guests can visit while immersing themselves in a festive mood. At the far end of the village are towering snowcapped mountains with several cascading waterfalls. In the distance, near the summit of North Mountain, Elsa’s ice palace glistens proudly, covered in snow.

Rapunzel’s Forest brings to life the world of the Disney Animation film Tangled. In the valley rises the tower where the long-haired princess Rapunzel has lived since she was a child. At night, the entire forest is bathed in warm light emanating from Rapunzel’s tower, lamps lining the paths, glowing restaurant and boathouse windows and lanterns hanging from the boats.

And lastly, Peter Pan’s Never Land is described as:

In Peter Pan’s Never Land, where the world of the Disney Animation film Peter Pan unfolds, guests become a member of the Lost Kids, a group of fun-loving, adventurous and energetic children. Here, guests can explore a pirate ship, dine in a secret hideaway, confront pirates with their friends and enjoy great adventures in Never Land. They can also visit Pixie Hollow, the fairy valley where Tinker Bell lives.

No word of Captain Hook… not yet.

Fantasy Springs is the eighth themed port at Tokyo DisneySea, joining the likes of Mediterranean Harbor, American Waterfront, Mysterious Island, Mermaid Lagoon, Arabian Coast, Lost River Delta, and Port Discovery. There will be numerous attractions and restaurants across the three areas including a Tangled-themed boat ride.

Paintings depicting Disney Princesses as well as floral motifs can be seen throughout the interior of the hotel, allowing the world of Fantasy Springs to continue from the Park to the hotel. The hotel is comprised of 419 “deluxe-type” rooms. In addition, there are 56 “luxury-type” rooms, offering guests the finest accommodation experience at Tokyo Disney Resort.

The most recent addition to Tokyo DisneySea was the new nighttime spectacular, Believe! Sea of Dreams, which replaces Fantasmic! at the Disney theme park.

Do you hope these themed areas make their way to other Disney Parks worldwide? Let us know in the comments down below!