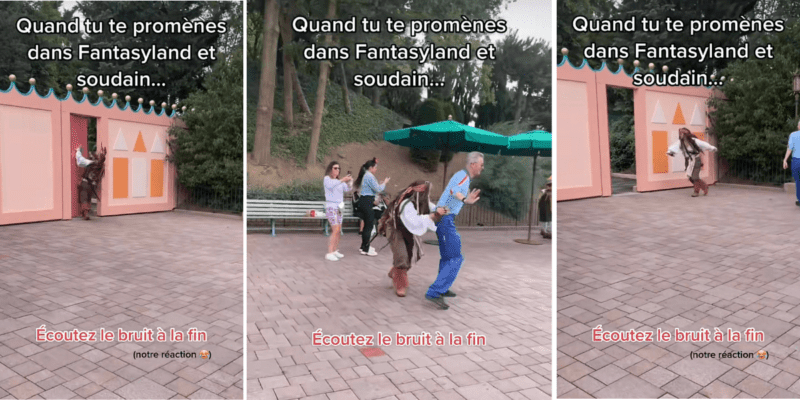 A beloved Disney character shocked bystanders with a loud bang as he slammed his face against a door running off stage.

Character interactions are perhaps one of the most magical experiences Guests can have while visiting Disneyland Paris. Sure, riding Hyperspace Mountain, Crush’s Coaster, Big Thunder Mountain, Phantom Manor, Indiana Jones and the Temple of Peril, or The Twilight Zone Tower of Terror is exciting, but nothing beats being able to hug Mickey Mouse and his pals, saying hi to your favorite superheroes at Avengers Campus, and meeting Captain Jack Sparrow himself.

However, character interactions don’t always go the way most would expect them to, whether due to Guest behavior, wardrobe malfunctions, or something that appears to be more common nowadays, Disney characters involved in accidents.

In a video shared by TikTok user @evaasgs, we can see Captain Jack Sparrow dodging princess Merida, who is pretending to aim at him with her bow. Our brave Captain, of course, takes cover behind a Cast Member while plotting his brilliant escape, sprinting towards a backstage door and jump-scaring Guests around with a loud bang as he slams his face against the door. Captain Jack Sparrow then acts confused and steps back erratically before exiting the Park.

Eva didn’t comment if the Disney character was hurt, though the loud slam was probably just acted out by the clever Captain Jack Sparrow. Even if the character had been injured after the scene, Cast Members are surely tended to by Park personnel, should it be necessary after incidents like this.

We recently saw Stitch take a dangerous fall at Disneyland Paris after running and slipping, falling on his butt. And while these incidents are unfortunate, they serve as good reminders of why Guests should never run in the Parks. You can see that video by clicking here. In addition, Mad Hatter and even Mickey Mouse have taken dangerous falls recently.

Have you ever seen a Disney character fall or have any other incident? Tell us about it in the comments below!