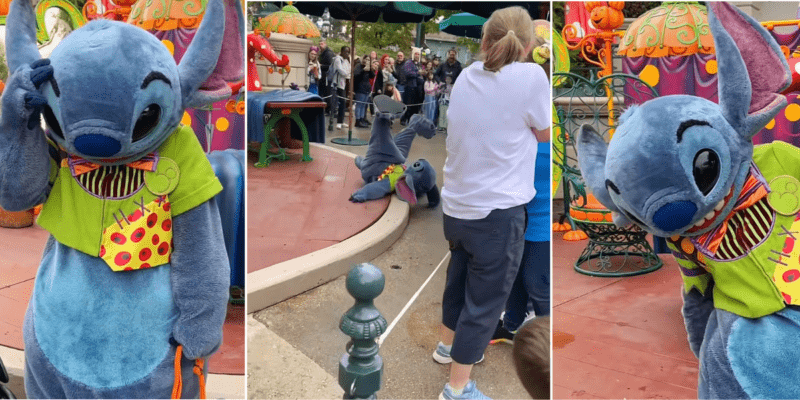 Guests were worried after seeing the beloved Disney character Stitch take a dangerous fall in front of hundreds.

Whether you love Mickey and Minnie Mouse, Goofy, Pluto, Winnie the Pooh, Captain Jack Sparrow, Captain America, Hulk, Kylo Ren, Chewbacca, Mando, or Grogu; having the chance to meet and interact with your favorite Disney character is undoubtedly one of the most magical experiences Guests can have when visiting Disney Parks worldwide.

However, character interactions don’t always go the way most would expect them to, whether due to Guest behavior, wardrobe malfunctions, or something that appears to be more common nowadays, Disney characters involved in accidents.

The latter happened at Disneyland Paris, where the beloved character Stitch from Lilo & Stitch (2002) took a dangerous fall, shocking Guests waiting in line to meet the adorable character in a unique Halloween costume.

User @BacklotProd shared a video of the unfortunate incident on TikTok, commenting that Stitch should also follow the rules at the Park and not run, as that is what caused the hard fall in the first place. In the video, we can see Stitch running toward his meet-and-greet location and jumping over a wet sidewalk, most likely after a drizzle, as we’ve recently seen at Disneyland Paris.

The wet floor caused Stitch to slip and take a dangerous fall on his bum, staying on the floor for a while as he recovered. The video is cut, so we can’t really see how Stitch managed to get up, though Cast Members most likely helped him get back up, checking if he was ok. @BacklotProd then has a short talk with Stitch and a Cast Member, saying they’d help him fix up his bum, to which the Cast Member added, “fortunately, your bum is cushioned, eh?” as Stitch rubbed his bum after the fall.

We’ve also seen Mad Hatter and even Mickey Mouse take dangerous falls during entertainment presentations. While it is never clear what the procedures are after an incident like this, Cast Members are surely tended to by Park personnel, should it be necessary.

This unique meet-and-greet experience with Stitch in his Halloween costume takes place at Main Street, U.S.A., in Disneyland Paris, and is only available for a limited time. Disney describes the experience as follows:

CowabungaaaAAHHH! The marvellously mischievous Stitch has landed in Disneyland Park and he’s having some seriously spooky fun in his Halloween costume. Join him for an out-of-this-world Meet ‘n’ Greet!

This Meet ‘n’ Greet experience may be changed, delayed or removed without prior notice.”

Have you ever seen a Disney character fall or have any other incident? Tell us about it in the comments below!